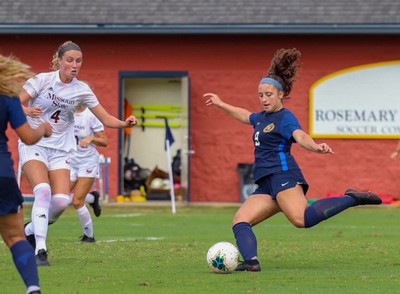 The Murray State soccer team began its 2021 campaign off with a forceful 6-1 victory over the Missouri State Bears on Thursday (Aug. 19) afternoon at Cutchin Field in Murray, Kentucky.

Chloe Barnthouse continued to show she is an elite striker with a goal today on an assist from Jones in the 54th minute following her team high seven goals from last season.

Freshman defender Morgan Bodker scored the first goal of her young career in the 56th minute with an assist from Hailey Cole to give Murray State a 3-1 lead.

Jones would then go on a scoring frenzy with a goal in the 59th on an assist from Barnthouse. The senior from Powell, Ohio, Jones would complete her first career hat trick in the 60th minute of the match with an assist coming from Saraya Young.

Sophomore Audrey Brumfield would cap off the scoring for the Racers in the 74th minute with the first goal of her career on an assist from Riley Johnson.

Jones' hat trick is the first for Murray State soccer since just last season when Chloe Barnthouse tallied one against Eastern Illinois.

"I didn't realize I scored a hat trick until after the third goal," Jones said, but stated she was extremely happy to celebrate with her teammates when she found out.

The Racers six goals are the most by a team under Coach Matt Lodge and the most goals scored in a Murray State match since 2011 when they scored six goals against Alabama A&M.

The Racers' next match will be at Cutchin Field on Sunday (Aug. 22) at 1 pm against the Bulldogs from Louisiana Tech.