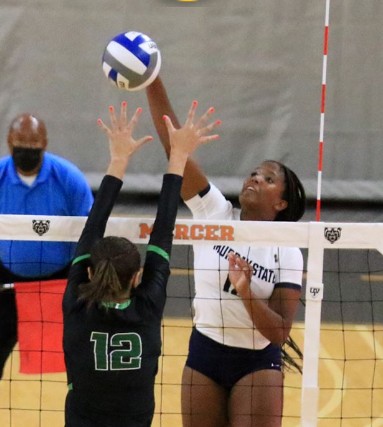 Murray State's Brooke Lynn Watts has been named the Ohio Valley Conference's Offensive and Newcomer of the Week, the league office announced on Monday.

Watts opened her collegiate career leading the OVC in kills (69) and kills per set (5.31). Her 69 kills is second in the nation and her 5.31 kills per set are fifth nation after the opening weekend.

The freshman from Odenton, Md. made her collegiate debut over the weekend, putting together three 20+ kills matches. Against UNH, Watts recorded 25 kills on 48 attempts for a .333 hitting clip and three service aces.

Watts followed that up with 21 kills, hitting 230 against Stetson and concluded the weekend with 23 kills on a .271 hitting percentage against Mercer. She added 22 digs and six services aces over the three matches.

Watts and the rest of the Racers take their 2-1 start on the road again at the Billiken Invitational, beginning with a 3:30 p.m. match against Arkansas-Pine Bluff on Friday, Sept. 3rd.