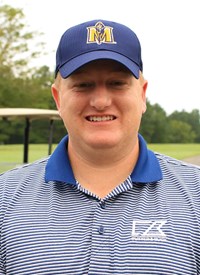 Newcomb, a 2010 graduate from Murray State and Benton, Kentucky native, is in charge of all internal aspects of MMGC. He is also responsible for marketing and promotion efforts of the course, organizing all golf events and inventory/sales.

"I am thrilled to be able to come back to Murray State for this opportunity," said Newcomb, who played on the MSU men's golf team from 2007-10. "Golf is my passion and I am very happy to be part of the team that cares for this great golf course at Miller Memorial."

Newcomb takes over for longtime MMCG director and former golfer, Will Snodgrass, who recently retired.

"The MSU Foundation is pleased that Nick has joined the staff at Miller Memorial Golf Course," said David Durr, president of the Murray State Foundation that has oversight of MMGC. "His reputation as a true golf professional is well known in our region. Nick has great golf course experience and came to us as a highly recommended candidate. Like Will Snodgrass did before him, we expect Nick to have significant positive impacts at Miller Memorial in the years ahead."

Newcomb has been a mainstay in region golf since he was an outstanding player for Marshall County High SNick Newcombchool (2001-05). For the Racers, he won the Ohio Valley Conference individual championship twice (2008 & 2010) and was named OVC Player of the Year in 2010. Newcomb teamed with his younger brother, Patrick, to help the Racers win the 2010 OVC team title. In the 2020 class, the Newcomb's are the first set of brothers to be inducted into the Murray State Hall of Fame since it was started in 1965. Nick Newcomb still plays professionally and is a top-level teaching professional.

Miller Memorial Golf Course presents a unique challenge for competitive and recreational golfers alike. Heralded as one of the west Kentucky lakes region's finest courses, Miller Memorial offers a variety of challenges for the most discriminating golfer. Measuring 6,592 yards from the championship tees, the par-71 layout has two distinct nines, which require a wide array of shot-making. The outward nine is set on hilly terrain and requires pinpoint accuracy from tee to green, whereas the inward half rewards length and accurate long iron play. MMGC is also home to the Murray State women's and men's golf programs.