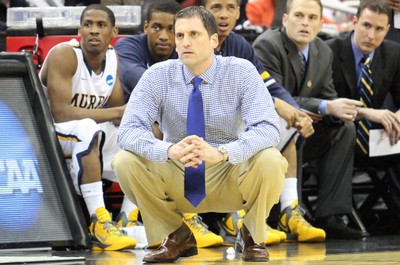 “If he could put on a jersey he would get out there and play with us,” Isaiah Canaan said of the first year Murray State head coach. “He'll do anything he can for us. He loves us like we were all his sons.”

When Billy Kennedy left MSU for Texas A & M last May the Racers hired Prohm, his long time assistant, to take his place. What happened next was like something out of a dream.

After being picked third in the Ohio Valley Conference at the beginning of the season, Prohm led the Racers to 23 straight victories as Murray State was the last unbeaten team in the nation. At one point they were ranked 7th in the ESPN/USA Today coaches poll. They enter the NCAA tournament with a 30-1 record and are ranked 10th by the coaches and 11th by the Associated Press. They have been ranked for 14 consecutive weeks.

Murray State finished the season with the most road wins of any team in the country and they are 3-0 against the top 35 teams in the RPI.

So it shouldn't be surprising that Prohm is Basketball Times choice for National Coach of the Year.

“It's an extremely humbling honor,” he said when told of his selection. “I'm thankful for having the opportunity to work at a tremendous school like Murray State. And, for having a talented group of players and a great staff. This wouldn't have been possible without them.”