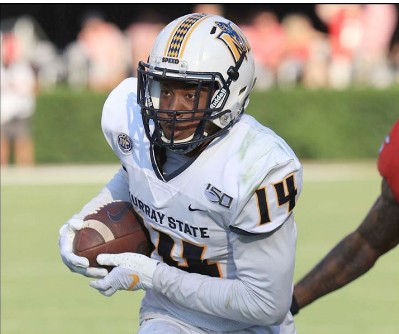 Fresh off their gritty performance at No. 3 Georgia, senior Nigel Walton and junior DaQuon Green of the Murray State football team received the first OVC weekly honors of the 2019 season by a Racer. Walton picked up Defensive Player of the Week honors, while Green was named Newcomer of the Week.

Walton had a huge game against Georgia including scoring one of MSU's two touchdowns on the day. He finished the day with the three tackles, but his biggest contributions would come elsewhere. In the first, Walton picked up a fumble and returned it eight yards, while in the third he picked off a Bulldog pass and went 35 yards for a touchdown.

After playing two seasons in the SEC, Green picked up where he left off against a former league foe with 101 yards and a touchdown on five catches Saturday at Georgia. His touchdown came on a 60-yard pass from Preston Rice in the first that tied the score and left the two teams knotted after one.

Walton, Green and the rest of the Racers return to action against FBS competition Saturday when they head north to Toledo to take on the Rockets at 7 p.m. ET on ESPN3.