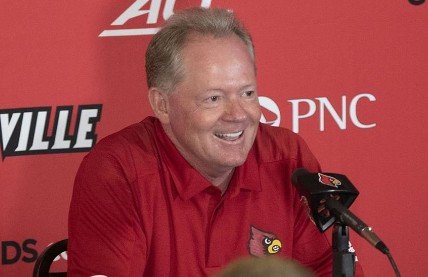 Despite opening Atlantic Coast Conference play with a loss at Virginia, there is still plenty of season remaining for the University of Louisville football team.

The Cardinals play their first ACC home game this weekend when Florida State travels to Cardinal Stadium for a 3:30 p.m. kickoff. Louisville will be home for three of the next four league games.

"I think the thing that we have to be able to do is work hard on the practice field and believe in that, and then, you get going," head coach Bobby Petrino said. "It is better to be 2-2 than 0-3. We are better there. And we've had one-third of the season, so there's a lot of games ahead of us. There's a lot of work in front of us, and we'll get better."

If the Cardinals are going to get back on track, the focus is on offense, which has been held without an offensive touchdown in the first half this season.

In the 27-3 loss to Virginia, the Cardinals were limited to 214 yards of offense, including 66 yards on the ground.

Malik Cunnngham and Jawon Pass split time at the quarterback position last weekend, combining to throw for 148 yards, but did toss a pair of interceptions.

"Jawon completed some balls, he did a good job throwing it," Petrino said. "He certainly didn't drive us down and get us in the end zone. We can't turn the ball over on a sack. You have to get both hands against your chest with the football."

For a team that prides itself as being one of the best offenses in the country year after year, it's been difficult to see the offense get off to such a slow start through four games.

There's definite frustration," Petrino said. "We have players that are competitors and certain things aren't happening the way we expected, they expected, so there's definitely frustration. The way you make confidence is you make plays, you have success."

"The number one thing that we have to do is understand that, work hard at it in practice. But I'm going to keep working and we're going to move forward, and we'll get it. We just have to put it all together. We have to do it one step at a time."

Sitting at 2-2, the Cardinals are certainly not where they want to be at this point of the season, but have through a similar situation only three seasons ago.

"There are some parallels to it as far as the inexperience and the fact that you should get better and better as the year goes on," Petrino  said. "There's no question about that. I think the thing that we have to be able to do is work hard on the practice field and believe in that, and then, you get going. "

The Cardinals have a week to get some of their problems straightened out with Florida State coming to Cardinal Stadium this weekend. The Seminoles evened their record at 2-2 after a 37-19 win over Northern Illinois after 352 yards passing from Deondre Francois.

"We've got a great challenge coming up this weekend," Petrino said. "We'll be excited for it. I know our guys will get ready to play. A lot of guys on our team know the players on their team, and we've always got a lot of energy going into this week. We have a lot of things to fix."