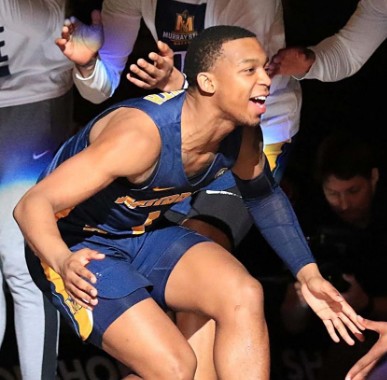 Three days after the Murray State men's basketball team lost a close Ohio Valley Conference Tournament final to Belmont, DaQuan Smith and his team were shocked when the nation shut down at the outset of the Covid-19 pandemic.

So Smith did what every student at Murray State and hundreds of colleges and universities did. He went home.

Home is Holly Springs, Mississippi. A place where Smith settled in and kept on playing the game he loves on the goal in his driveway. The game can't get any more basic than that.

"I rested the first week and then got to work," Smith told GoRacers.com. "I have an outdoor court and I worked on my game."

Smith said his first goal in the driveway arrived when he was in the fourth grade. By his memory, he's on his third or fourth goal. We'd say he probably wore the other ones out from taking so many shots. Just how many shots has Smith taken in his driveway?

"Well, I know I'm always shooting when I'm at home," Smith said. "It would be hard to say exactly, but I'd say I've probably taken a million shots in my driveway over the years. That's a whole lot of shots!"

Smith and his teammates have adjusted their workout regimen according to Covid-19 procedures, but they try to not think about it much when they're on the court and they tried to pay little attention to all of the talk of when and how the season might happen.

Although the 2020-21 schedule is not ready for release just yet, we do know the NCAA has set Nov. 25 as the first day the season can start.