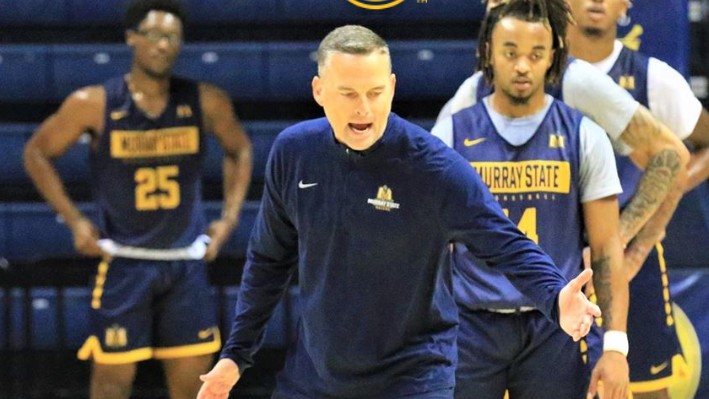 Head coach Matt McMahon and the Murray State Racers host the Brescia Bearcats in a 7 p.m. exhibition game Monday at the CFSB Center in Murray, Kentucky. The game marks the start of the 97th season of collegiate basketball for Murray State University. The day is a doubleheader at The Bank with the MSU women's team hosting Trevecca Nazarene at 5 p.m. in an exhibition game.

The Racers were selected third in the Ohio Valley Conference men's basketball poll after a vote by the league's head coaches and communication directors. The Racers were picked third with 136 points, as Belmont and Morehead State were first and second with 161 and 141 points. Southeast Missouri (101) and Tennessee State (84) were fourth and fifth with Austin Peay (76), SIUE (65), Tennessee Tech (62), Eastern Illinois (43) and UT Martin (34) rounding out the field of 10 teams.

In his 31st season, the "Voice of the Racers" and now a Murray State Hall of Famer, Neal Bradley is loved by Racer Nation. Former MSU assistant coach Kenny Roth provides analysis. All MSU games can be heard online at Froggy103.com and GoRacers.com and over the air on 103.7FM. Nearly all of MSU's games this season can be watched on one of the ESPN platforms.

Monday's exhibition game will be a historic night when new Brescia coach Sarah Gayler becomes the first women to be head coach of a men's basketball team in the 71-year history of the National Association of Intercollegiate Athletics (NAIA). Gayler joins Brescia after working for the Milwaukee Bucks in the NBA.  She played at the University of New Orleans.