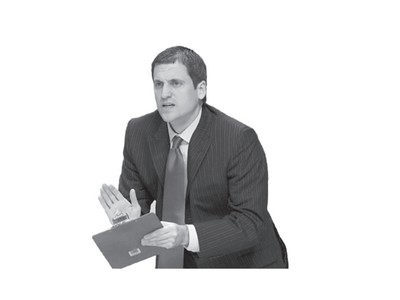 Racer  Insider: You've been a head coach for nearly five months now. Has it been what you expected it to be?

Steve Prohm: It's been busy. But I'm to the point now where I'm getting settled into the role. The first couple of months I was just running around trying to get a lot of things taken care of. Now that the season is nearly here we're starting to practice and we're bringing recruits in to visit the campus. It's been a great learning experience so far and I'll continue to learn because that's the only way you get better.

RI: As a head coach you have to organize everything and delegate tasks to your staff. Has that been hard for you to get used to?

SP: In a way. I have always had a tendency to just do things. If I knew it had to be done I just did it. But my staff is doing a great job now that they've moved in and their families are settled. And I'm relying on them now.

RI: Back in August you took the team to Canada to play three exhibition games. Was it a relief to be able to focus on  coaching  instead  of  worrying  about  the  administrative aspect of the job?

SP:The trip to Canada was a lot of fun for a lot of reasons. It was great to go up there and have a lot of fun with our guys and really get to know them. But it was also fun to finally get to coach. Even though it was in Canada it's only natural to be nervous when it's your first game. And those nerves subsided a little in our second and third games.

RI: You worked for Billy Kennedy for most of your career as an assistant and you've made it clear that your approach to the game will be very similar to his. But are there some things you'll do differently?

SP: I get asked that question all the time. I've been around defensive oriented coaches from high school on. And I worked for coach Kennedy for 12 of the last 13 years. I'm probably more vocal and more talkative than he is. But the core of our program will be the same.

We're going to try to be really good defensively because that's  how  you  win.  We'll  try  to  make  sure  our  kids  handle themselves the right way, make sure they have good character. And we want them to be tough minded.

I want Isaiah Canaan and Zay Jackson to really push the ball in transition. I want Ivan (Aska), Ed (Daniel), and Brandon (Garrett) to really run the floor. We want to try to get easy baskets if we can. If not then we'll run our half court sets. But most everything will be the same.

RI: How much have you been able to work with the team since the semester started?

SP: They've been lifting weights on Monday, Wednesday, and Friday at 6:30 am. On Tuesday and Thursday they have conditioning at 4 pm. And then we can work with them two hours a week.

So we were doing individual workouts up until September 15. Since then we've been able to work with the whole team for two hours a week. So we've broken that down into two one hour practices. We've been working on our defensive principles and our secondary break.