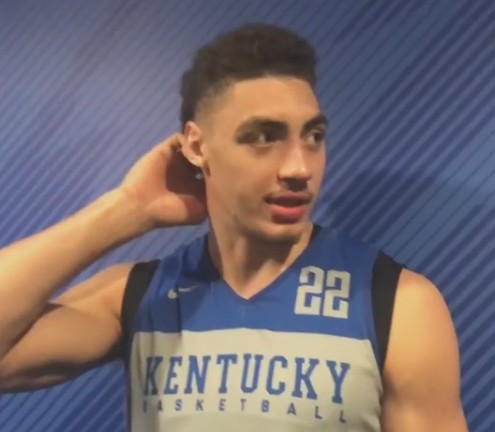 It's a contradiction, but a willful one. And though John Calipari has repeated it many times in similar situations, it holds true once again this week.

"If you win it's huge. If you lose you just put it in the rearview mirror, learn from it and go on to the next game," Coach Cal said. "But it'll hold for any of the teams that win this thing. The two teams that win, it'll hold through whatever. It'll give you a cushion as you go forward, but it's just, it's early."

"This thing", of course, is the State Farm Champions Classic. No. 2/2 Kentucky will face No. 4/3 Duke in the late game of the annual event, set to begin at around 9:40 ET/8:40 CT p.m. on ESPN after Michigan State and Kansas square off in the first of two marquee matchups in Indianapolis.

"I would say all four it's a process," Calipari said. "You play bad and win or you play well and lose, this is learning. And you really get a chance to say, OK, what are our strengths? What are some weaknesses? Is there anything glaring that we're going to have to address? And I'll tell you, it's not bad that you address it right away."

The Champions Classic has always been an early season affair, but this is the first time it's coming on the season's opening night.

"I'm excited to play our first game against such a big-time program," Reid Travis said. "They have a lot of great players, great coaches. I think it's the best thing for us – kind of get thrown into the fire right away and see where we're at. We have a lot of things we need to work on still, but being able to use this as a measuring stick, I think, is going to be great for us."

You can tell Reid Travis is a veteran, because he's already talking like his coach about Tuesday night's game. In a game featuring seven of the top 13 players in final RSCI rankings for the class of 2018, Calipari says Kentucky will be counting on the likes of Travis against the Blue Devils.

"I don't know if it's an edge, but their experience should make them less anxious than anyone in the building," Calipari said. "They've been through it."

Travis elected to transfer to UK to play in games exactly like this, while PJ Washington has now played in a season's worth of them. Last year in the Champions Classic, Washington had a quiet two points as UK's comeback bid against Kansas fell just short.

"Last year I just didn't know what to expect," Washington said. "This year I kind of know what it's going to be like. I know what Cal expects from me and I know what he expects from the team. I just have to go out there, do what he wants and just basically produce."

UK-Kansas is one thing – and will be again when the two teams face off in January – but UK-Duke is another. There's the history dating back to the 1978 national championship game and the 1992 Elite Eight, plus the fact that the Cats and Blue Devils have competed to be the kings of college basketball – both on the court and on the recruiting trail – under their two Hall of Fame coaches in recent seasons. That will bring some added baggage, but Coach Cal and his staff have worked to ensure their players don't carry it on to the court.

"The coaches have done a great job of taking that off of us and explaining that this is just another game," Travis said. "Obviously we're excited. It's a big game for us, but at the end of the day it's just one of many throughout the season and we're just going to use this to try and see where we're at, see the things that we need to work on."

The result of Tuesday's game will matter a great deal to fans, and it will be a massive resume boost for the winner come March. It won't, however, dictate what either team will be when that time comes.

"They're excited about playing the game – my guys," Calipari said. "I like my team. I'm good. We may be facing a team that's better than us. OK. But over the long haul, the way this team practices, the way they get along, the grind of this, that each individual player has gotten better, I'm good. I want this team, and we'll throw it up and see what goes on."