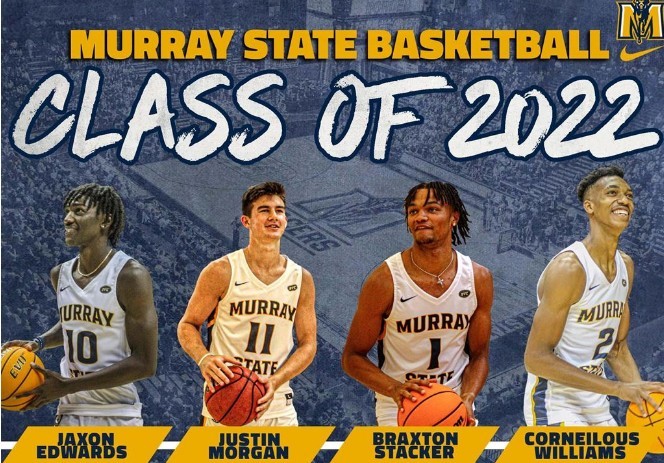 Murray State men's basketball coach Matt McMahon has announced the signing of four players to join the Racers as freshmen in the 2022-23 season.

"We are extremely excited to officially welcome Jaxon, Justin, Braxton and Corneilous to the Murray State family," McMahon said. "We love that all four talented players come from winning high school and AAU programs. We are looking forward to their arrival on campus next summer."

Out of Cathedral High School in Indianapolis, Jaxon Edwards is a 6-6 guard who is playing for Coach Jason Delaney.

"Jaxon is a long, athletic wing who really caught our attention during the summer evaluation period," said McMahon. "He impacts the game at both ends of the court. We like his versatility on the perimeter with his ability to attack the basket and play above the rim.  He makes the players around him better."

As a junior in the 2020-21 season, Edwards averaged 10.7 points per game, 5.6 rebounds and 1.6 assists, competing in one of the nation's top areas of high school basketball, the 10th sectional of Class 4A in Indiana. He earned Indianapolis All-City Honorable Mention and was named All-State by the Indiana Basketball Coaches Association. He was a finalist for the Indiana Junior All-Star Team.

Edwards excelled in big games. In the Indianapolis City Championship against Crispus Attucks, he scored 17 points and grabbed six rebounds. Against Indiana's top team in Class 2A, Ft. Wayne Blackhawk Christian, he scored 19 points, hauled in 13 rebounds and dished out four assists.

"Jaxon has been a coach's dream as far as the way he receives coaching and responds to it," said Coach Delaney. "He smiles a lot and has a joy for the game. He is only scratching the surface of the kind of player he's going to be at the college level because he's seen growth in his game every year we've had him. He's an explosive player that makes plays you don't see coming and that allows him to Impact the game on many levels."

Justin Morgan is a guard from Memphis, Tenn. and is playing for Coach Preston Butts.

"Justin is an elite shooter with one of the quickest releases we saw all summer," McMahon stated. "He does a good job moving without the ball to create scoring opportunities and has a great feel for the game.  He is a relentless competitor on the court and he will bring toughness to our backcourt."

"I've had the pleasure of coaching Justin for a couple of years and he's an outstanding young man," said Coach Preston Butts. "He's the type of kid who has been the face of our program. He cares about his teammates, he's very coachable and gives you everything he's got. Being from the Memphis area, an elite player can be hit with a lot of distractions, but Justin has handled that very well. The best thing I can say about his ability is that he's a basketball player. Whatever we need, he can do it. His game has taken a huge leap forward because he's always been able to shoot the three, but now he's got the other shots. He cares about playing defense and that is probably the most improved part of his game."

Braxton Stacker is a guard from Cardinal Ritter College Prep in St. Louis, Mo., where he plays for Coach Ryan Johnson.

"Braxton is a skilled combo guard who plays with a high motor," said McMahon. "His energy and effort on the defensive end first caught our eye this summer.  He comes from a state championship high school program and is very explosive on the offensive end of the court as well.  His game really fits our program well."

Stacker helped Cardinal Ritter win the Missouri 3A State Tournament in the 2020-21 season, while earning honors as Missouri All-State and the state's Defensive Player of the Year. He scored 11.5 points per game to go with 5.0 rebounds per game.

"For me, Braxton is the kind of student-athlete and person you want on your team," said Coach Ryan Johnson. "He's humble, works hard and is a great teammate.  He transferred in as a junior and his adjustment didn't take long. He fit in perfectly with our program. He lives in the gym and loves the game. As a player he's a Swiss Army Knife. He can do it all, including playing the point guard or two-guard position."

"Corneilous brings a paint presence to our program," McMahon said. "With his length and athleticism, he is a rim protector on the defensive end.  We like his ability to block and alter shots around the rim.  Offensively, he runs the floor well and does an outstanding job of finishing plays in traffic."

Williams is part of a team at Combine Academy that started their 2021-22 season 16-0. He had a run of hitting 11-straight shots from the field to set the school record.

"Corneilous is a high character young man who competes every day and I've always been impressed with the effort he gives," said Combine Academy Coach Steve Jecewiz. "He's good around the basket and I think his shooting range has advanced a lot in the past year. He dunks the ball a lot because, when he gets the ball close to rim, he can finish the play. Defensively, he's one of the most talented players that I've coached. He's going to make an immediate impact defensively for the Racers.  Corneilous is a winner, and I look forward to watching him have a great career at Murray State."