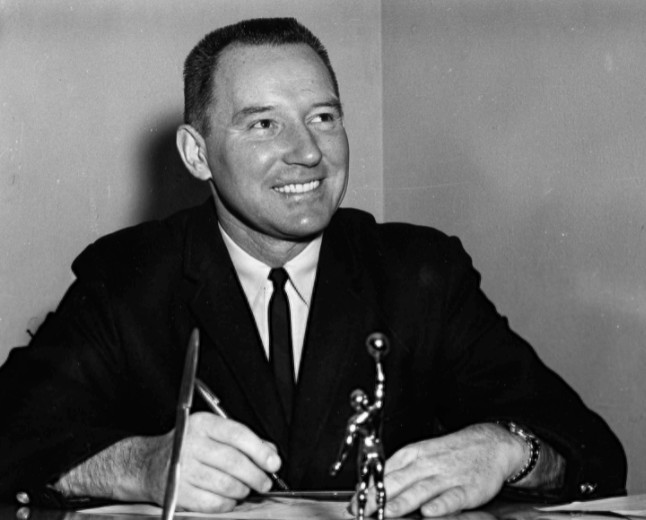 The day will be a time to honor the memory of the great Racer coach who passed away in 2021 and is interminably linked as one of the builders of the Murray State program and the greatest men's basketball history in the Ohio Valley Conference.

Ticket purchases can be made by visiting GoRacers.com or by calling the arena ticket office at (270) 809-3000. Tip off time for the Racers and Blue Raiders is 7 p.m.

Coach Luther is the first of two special days at Racer Basketball in which a legend will be honored. Coach Ron Greene Day at the CFSB Center is set for Jan. 22 when Murray State hosts UT Martin.

Racer Nation lost two of it's greats in 2021 when Luther passed on May 8 after Greene on March 31.

A 1986 inductee to the Murray State Hall of Fame, Coach Cal Luther was hired to coach the Racers in the fall of 1958 after a successful stint at DePauw.  When his 16 seasons came to an end with the 1973-74 season, Luther set the Murray State school record that still stands today of coaching in 395 games. His longevity produced three Ohio Valley Conference regular season championships and a pair of OVC Coach of the Year awards and NCAA Tournament appearances.

He coached 17 All-OVC players for the Racers who were honored 28 times and three that earned the OVC Player of the Year award four times including Jim Jennings (1963-64), Claude Virden (1968-69) and Les Taylor (1971-72, 1972-73). All three are members of the MSU Hall of Fame. Dale Alexander, Steve Barrett, Dick Cunningham, Stewart Johnson, Herb McPherson and Jimmy Young gave Luther nine players that are of the MSU hall.

Luther's 1963-64 team became Murray State's first squad to play in the NCAA Tournament. He led the Racers back to the NCAA's at the end of the 1968-69 season.

Accepting the additional responsibilities of athletic director in 1967-78, Luther's zeal for sports kept the Racers strong in the OVC, winning the coveted OVC All-Sports Trophy in 1973 and finishing in the top three in All-Sports competition in eight of Luther's eleven years. During that span, MSU claimed nine conference championships in various sports. Luther spearheaded the planning and construction of Roy Stewart Stadium that opened in 1973.