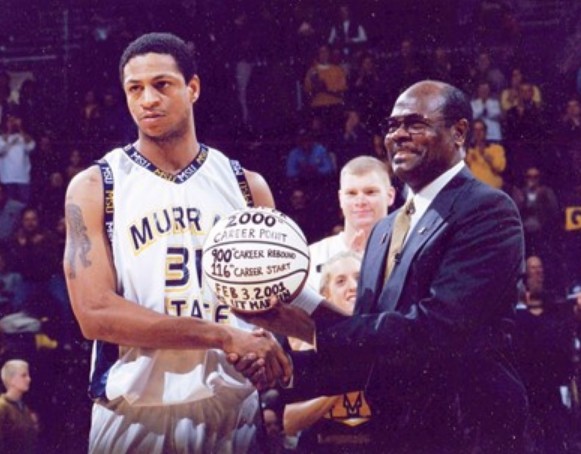 Basketball has always been a part of Tevester Anderson's life. From hot summer days in Canton, Miss. when as a child he tossed a rubber ball about the size of a softball at a backyard goal, to his days at Auburn coaching players like Charles Barkley, to his current tenure as head coach at Murray State, his life has followed the rhythms of the game.

Canton was, and still is, a small town about 15 miles from Jackson, a poor rural section of Mississippi. And, when Anderson was a boy it was deeply segregated.

In those days, blacks in Mississippi lived in a world apart. They went to seperate schools, they couldn't eat in restaraunts with whites, they couldn't even drink at the same water fountains as whites. Some even lost their lives to racial violence.

But, Anderson doesn't dwell on these things. Indeed, he refuses to discuss them.

"I don't want people to feel sorry for me or see me as a pioneeer," he said. "I never watch movies about segregation and I don't think about those things. Some blacks are upset at what happened in the past and hate white folk. But, I'm not like that. I wouldn't be where I am today if it wasn't for white people like Joe Iupe."

Iupe gave Anderson a job at a men's store in Canton when he was a teenager.

"Joe was a white guy, but he was like a father to me," Anderson said. "He took special care of me and paid me decent wages. He said I was the most thorough person he had ever seen.

Iupe was one of Mississippi State's biggest boosters and when Anderson was coaching at Auburn he took him around the campus and introduced him to everyone, showing them what a success his "son" was.

Anderson played basketball at Madison Training School and later at Rogers High School under the tutelage of James Jones Jr.

"I cared as much about him as I did my Daddy. He was just like my Daddy. A lot of my values come from him - caring about others and respecting all people, having manners, and taking care of your players."

Those who have heard Anderson speak won't be surprised to learn that in addition to his athletic exploits, he won the Future Farmers of America state public speaking contest while in high school.

Following his years at Rogers he was awarded a basketball scholarship to Campbell Junior College. After two years there he played one year at Philander Smith, a traditionally black school with an outstanding academic reputation. Then, one year later he transferred to Arkansas - Pine Bluff where he earned his degree.

"I was always the guy who guarded the other team's best player," Anderson recalled. "I always guarded guys who were 6-4 or 6-5 and wouldn't let them get the ball. I was considered an outstanding defender."

Following his graduation from Arkansas - Pine Bluff, Anderson planned to go to medical school. But, those plans were put on hold, as it turned out permanently, when he got a call from his former high school coach.

"I was asked to come and coach one year at Rogers High School by my former coach," he said. "I couldn't say no. And, I've been coaching ever since."