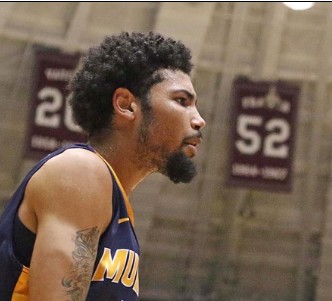 PLAYERS OF THE WEEK

Taylor scored a career-high 32 points and added 11 rebounds in Austin Peay’s 95-68 win over Purdue Fort Wayne. Last year’s OVC Freshman of the Year hit 14-of-22 field goals (63.6%), including 2-of-5 3-pointers (40.0%), while also dishing out a career-high five assists, blocking a shot and making a steal in 35 minutes. It marked his fifth double-double of the season, which is tied for first in the OVC. Taylor had entered the contest with no more than 16 points in his previous four games but scored 18 points in the first half and 14 points in the second half. Taylor leads the OVC in rebounding (9.3/game) and ranks fifth in scoring (17.3 points/game) and is seventh nationally in offensive rebounding (4.0/game).

Fitzpatrick-Dorsey, a transfer from Ole Miss, had 23 points, a season-high seven rebounds, two assists and a steal in a 78-76 loss to North Carolina A&T. Fitzpatrick-Dorsey hit 7-of-12 field goals (including 2-of-3 3-pointers) and 7-of-8 free throws in 31 minutes of action. It marked the second-straight game and fifth time this season he has led Tennessee State in scoring.

Notes From Around the League

OVC Overview/This Week’s Highlights: Belmont overcame a 12-point deficit to come-from-behind and top 11-time national champion UCLA 74-72; trailing by one, Kevin McClain hit a lay-up with 2.3 seconds left to give his team the win (Belmont added a free throw for the final score)...It marked just the fourth home loss for UCLA in its last 40 overall games, and was just its second loss in 42 home games against non-Power 5 teams under Steve Alford (they also lost to Monmouth in 2015)...It was only the 14th time in UCLA’s last 125 games they had lost when leading by double-digits and only its 12th loss in the last 113 games when leading at halftime...Belmont picked up two points in each the AP and Coaches Top 25 polls this week; the Bruins have received votes in the Top 25 polls in eight of the past nine years...Eastern Kentucky senior Nick Mayo became the Colonels all-time leading scorer on Saturday at Xavier; Mayo moved past Matt Witt (2002-06) for No. 1 on the list and now has 1,851 career points...Mayo is on pace to become just the 18th member of the OVC’s 2000-Point Club (and first to join since 2012)...Murray State’s Ja Morant leads all Division I players with 9.5 assists/game; he averaged 13.5 assists/game in two wins last week, including 14 (two off the Murray State record) against Jackson State...Murray State went to Southern Illinois (picked third in the MVC Preseason Poll) and won by 28 points; the Salukis entered the game hitting 40 percent from 3-point range and MSU held them to just 21.4 percent (3-of-14)...After its win over Jackson State on Saturday, Murray State has won 14 home games in a row...Murray State will play a Top 10 team in Auburn on Saturday; it is the first Top 10 opponent for MSU since 2012 (No. 9 Marquette)...Austin Peay’s Terry Taylor had a career-high 32 points in a win over Purdue Fort Wayne last week; he also added 11 rebounds to net his OVC leading fifth double-double of the season...Austin Peay improved to 3-0 at home this season, its first 3-0 start at the Dunn Center since 2009-10...APSU’s Zach Glotta has 15 steals in his last four games, one-fifth of his career total (75)...In the NCAA’s NET ratings entering this week, Belmont is No. 39 and Murray State is No. 44.

Tillery Ties OVC Record for 3-Pointers Made in a Game: Tennessee Tech junior Corey Tillery tied the OVC single-game record for made 3-pointers with 10 in a win over Warren Wilson College on December 6. He tied the mark previously established by Marc Polite (Eastern Illinois, 1999-00), Glenn Cosey (Eastern Kentucky, 2013-14) and Nick Smith (Belmont, 2016-17).

Morant Records 18th Triple-Double in OVC History: Murray State sophomore guard Ja Morant recorded the 18th triple-double in OVC history on November 24. Morant had 29 points, 13 rebounds and 12 assists in a win over Missouri State. Morant also had a triple-double as a freshman and is currently one of three players in OVC history to record multiple triple-doubles in a career (joining Austin Peay’s Trenton Hassell - who had 3 - and UT Martin’s Lester Hudson).

Runnin with the Racers with Dave Winder and Popeye Jones