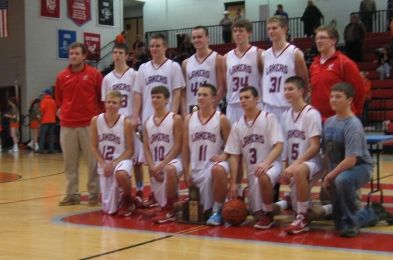 “I'm really proud of the kids,” the Lakers' head coach Bruce Lane said. “They really played hard the whole way. The first game at Marshall I thought we competed hard. But over here there were times when we didn't play hard. We watched film from that game and really drove that point home.”

The Lakers were led by Parker Adams who scored 19 points. Connor Wagner had 17, Michael Arnett had 12, and Wade Carter had six.

The key to the game was defense. Calloway played zone for most of the game but they frequently changed the look the zone gave the Marshals. And that seemed to bother them as they hit just 1-of-12 shots from beyond the 3-point line.

“We tried to throw some different wrinkles at them, tried to confuse them,“ Lane said.

Calloway also focused on playing inside/out. Instead of just jacking up contested shots they set up their perimeter game by throwing the ball into the paint.

“That's one thing we talked about,” Lane said. “ You have to be patient against Marshall because they are so good defensively. You can't take bad shots against them because they're going to get the rebound and go score.”