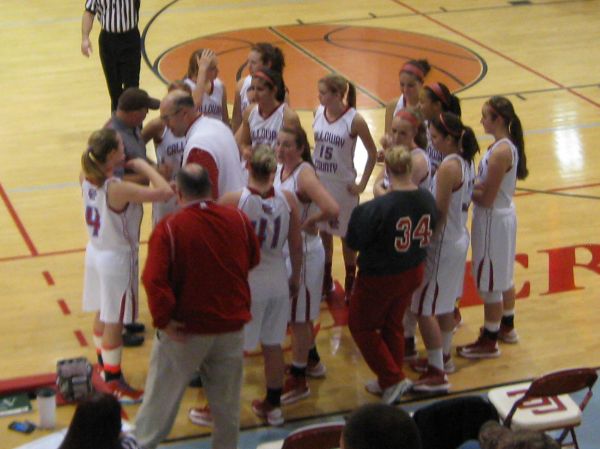 The Calloway County Lady Lakers will play Marshall County in a first round game of the Fourth District basketball tournament at Calloway County High School on Tuesday evening at 6:00 pm.

Calloway comes into the game with a 15-15 record. Marshall is 22-8 and riding a four game winning streak.

This will be the third meeting between the two teams. The Lady Marshals beat Calloway 65-54 in Draffenville on January 4. Then they beat them 51-37 at Jeffrey Gymnasium on February 8.

In the first game Marshall got 23 points from Taylor Meadows, but they won primarily because they outrebounded Calloway 43-27. Summer Simmons led the Lady Lakers with 15 points.

The second game was decided primarily by turnovers. Calloway had 26 to Marshall's 10. And most of the Lady Lakers turnovers were unforced. Meadows again led the way for Marshall with 21 points. Abbey Spann led Calloway with nine.

For Calloway to win they will have to take care of the ball. And we know they can do that. The first time they played Marshall they only had 11 turnovers.

They will also have to be competitive on the boards. We know they can do that because they outrebounded Marshall the second time they played them.

Finally, they must find a way to contain Meadows. She scored right at 40 percent of Marshall's  points in the two previous games. If the Lady Lakers can hold her to 15 or less on Tuesday I think they'll walk away with a victory.