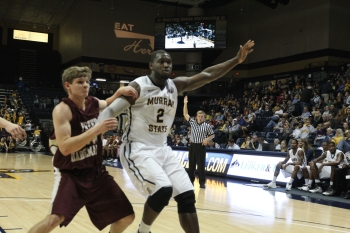 Jonathan Fairell is a study in contrasts.

He comes from Miami, Florida which brings to mind sunny beaches and people at play. But he's from the other Miami, the one that's riddled with crime, where humanity's darkest forces hold sway.

He looks like the Incredible Hulk. But he is nimble enough to defend guards.

And although he's a jock, his favorite pastime isn't playing video games. No. He would rather go dancing.

“I grew up in Carol City and Opa-locka,” Fairell said. “Those are two rough areas. You see things there that you don't want to see, day and night – robbery, murder, kidnapping. I saw someone get stabbed in the park when I was 16. It was just bad. I knew I had to get out of there.

“Coming to Murray really changed my life. It's completely different here. School comes first and then basketball. But I'm doing great in school and I'm doing pretty good in basketball.”

Sports have been a part of Fairell's life for as long as he can remember.

“I had a little basketball goal when I was small but I was really more into football,” he recalled. “I played football whenever I could. We would even play on the way to school in the morning. We played so much they took the football away from us.

“That didn't stop us though. We got a Gatorade bottle and filled it up with sand and we used that. I was always overweight for youth league. My grandma was from the islands so all she did was cook and feed me, feed me, feed me. I had to quit eating so much so that I could play.”

Fairell's football career was cut short by spinal stenosis in his neck. He had to quit playing or risk paralysis.

“I was crushed,” he said. “I was 16 years old. I had just been moved up to varsity and suddenly I couldn't play any more. Since I couldn't play football any more I decided to try out for the basketball team.

“I made the JV team but I didn't really know what I was doing. All I could do was run, block shots and rebound. But I kind of liked it. So I got my own ball and a jump rope so I could work out and work on my game.”

As a high school senior, Fairell made the Dade County All-Star team. When they played the Broward County All Stars he met current teammate T. J. Sapp.

“It's crazy. T. J. and I met in so many different situations,” Fairell said. “We played on the same AAU travel team. Then I went to Orlando for an unsigned seniors all-star game. T. J. was playing in a USA vs. Florida all-star game there. I got there a couple of days early. I just got the date wrong. So I wound up staying with him in his room. I slept on the floor.”

“He told me that he saw something in me that I couldn't see,” Fairell recalled. “I didn't know what he was talking about. I thought I was just an average player.”
As a sophomore at Indian River he averaged 17.7 points and 11.8 rebounds while shooting 66 percent from the field. He was a first team Southern Conference, FCSAA and NJCAA Region-8 selection.

“I had a lot of options coming out of junior college,” Fairell said. “But I wanted to make a decision before the actual signing day so that I could concentrate on my school work. So I narrowed it down to Tennessee Tech and Murray State.

“Murray State was just the best fit for me. Alberto Jempierre and Coach (James) Kane are good friends. They grew up together down in south Florida. I loved the community. They really embraced me and that was a great feeling. I had never experienced anything quite like that before.”