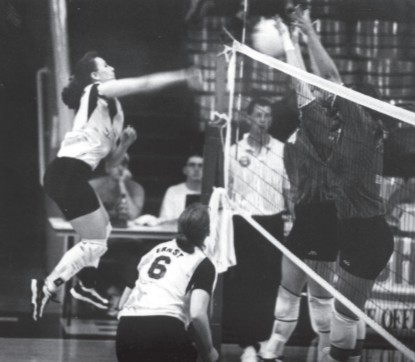 Anyone who has watched her play is impressed by Wood's jumping ability. With a 31 inch vertical leap, she can really fly. But, surprisingly, this is more the product of hard work than natural ability.

"That was something I worked on," she said. "My dad showed me some exercises I could do to strengthen my jumping muscles. So, the summer before my freshman year in high school I hit it really hard.

"And, it was kind of funny because out where I live there's not a lot to do. So, I would just take my summer and do my jumping exercises. And, it did wonders for me. I did box jumps, jumping up stairs on one foot, jumping on a trampoline, and the famous hops. It's an exercise a friend of my dad's showed me. You start on one leg and take two jumps forward as far as you can. Then on the third jump you try to get as high and as far as you can. And, then you switch legs. That's what really worked my muscles."

All the work paid off, as Wood earned All-Conference, and All-State honors in high school. While playing for her club team she         was a USA Volleyball first team All-American. Still, things haven't always gone exactly the way she planned them.

"I was a setter my freshman year in high school," she recalled. "I was jumping up to set the ball. I completely missed the ball and it hit my head. But, it went over and I got a kill."

Since coming to Murray State Wood has become a fan favorite and one of the team's mainstays. In 1998, as a freshman, she was second on the team in kills and was twice selected OVC Freshman of the Week. Last year, she was named to the OVC's All-Tournament team, was a second team All-OVC selection, and was a winner of the OVC Defensive Player of the Week award.

Wood says that playing for Racer head coach Dave Schwepker can be challenging. "He's not afraid to puxh you and we have pretty long practices," she said. "He's fun, because he is psycho. He gets as excited, if not more excited than we on the team do. You can just tell he loves the game. When he comes out and scrimmages with us, you almost have to laugh because he gets really excited and he goes after everything. And, it inspires us to go after things and just not let the ball fall."