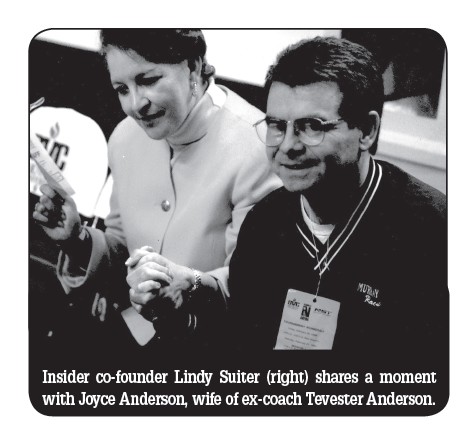 Written by Dusty Luthy in 2016

When Lindy Suiter needs to survey his family heirlooms, he finds theyĺre spread all over the city of Murray. His home, his office - and his other office.

The other office may not contain much of monetary value, however, and you probably wonĺt find many photos of his wife or daughter. But you will find plenty of photos of his other family members.

Housed in a small building in downtown Murray, some of Suiterĺs most priceless memories reside in sealed plastic totes, layered in cardboard boxes, bins brimming with VHS tapes and papers scattered in piles on the floor. Other mementos reside on the walls behind glass.

The office is home to 20 years of Murray State athletic history, as told through the eyes of the Racer Insider magazine.

For Suiter, CEO, creator and publisher of the Racer Insider, the Murray State athletes, coaches and staff who have graced the covers and pages of the magazine are family.

Weĺve got all those pictures and all those stories of all those things that have happened over the last 20 years sitting right here in this room,ö said Suiter, likely the Racersĺ most ardent supporter. ôThatĺs whatĺs wild.ö

The Racer Insider is celebrating its 20th anniversary this year. Volume 1, Issue 1 dates back to February 24, 1996 with menĺs basketball players Marcus Brown, Fred Walker and Vincent Rainey surrounding a young and smiling coach Mark Gottfried on the cover.

Today, Volume 21, Issue 5 goes out to become one of over 160 issues with dozens of Racer athletes emblazoned upon Racer Insider covers, preaching the gospel that is Murray State athletics.

ôThatĺs whatĺs been good about it,ö Suiter reflected about the publication. ôNot only promoting the school but all the different people Iĺve met is just mind boggling. The 20 years of relationships with different people and special friendships are important.ö

Will Aubrey, lead writer and editor, reflected on those whom the magazine has been able to touch.

ôEveryoneĺs been so easy to work with,ö Aubrey said. ôOne of the benefits that weĺve had over the years - all these people, coaches, media relations personnel - they become friends and family. And the kids, the athletes, I've had them tell me they have stories I wrote about them framed, hanging on a wall in their home.ö