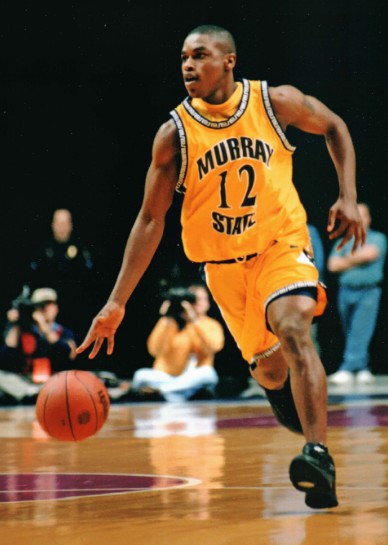 When Aubrey Reese came to Murray from Auburn, Alabama in the fall of 1996 he couldn't know what the future held. And he certainly never expected that he would one day be an assistant coach for the Murray State women's basketball team.

ōCoach T (Tevester Anderson), one of Coach (Mark) Gottfried's assistants, had coached at Auburn University. My high school coach had coached his son so they knew each other,ö Reese recalled. ōSo it was an easy decision. My mother was comfortable with it and then there was the basketball tradition here. I remember going into Coach Gottfried's office and they had a picture on the wall of Racer Arena and it was packed.ö

After sitting out a year, Reese played  the 1997-98 season under Gottfried and averaged 4.6 points in limited action as the Racers crushed Tennessee State in the OVC tournament final and earned a #9 seed in the NCAA tournament.

ōCoach Gottfried was an easy guy to play for,ö Reese said. ōHe was demanding, but I was used to that. And he was an unbelievable motivator. After he talked to us before a game, or at halftime, we were ready to run through a brick wall for him.ö

In the spring of 1998, Gottfried left for Alabama, and Anderson was hired to take his place.

ōAll the players made it clear that we wanted them to hire Coach T even though it wasn't our decision,ö Reese said. ōWe knew we had a lot of talent on the team and we wanted someone we were familiar with.

ōI had sat behind Chad Townsend my first year and he was a good player, but I knew I was ready to be the starter. But Coach T called me in to his office and he told me he wasn't promising me anything. He said he was recruiting other point guards. And I told him that he could bring in whoever he wanted but I was going to be the starter.ö