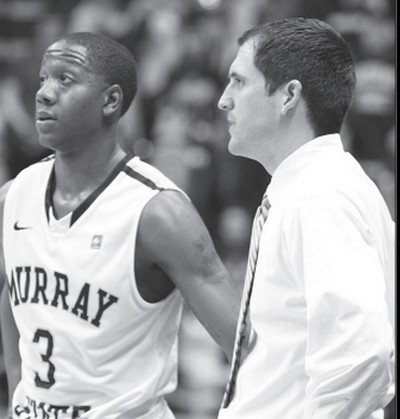 Racer  Insider: Here  you  are,  in  your  first  season  as  a head coach and you're undefeated and ranked in the Top-25. Do you feel like you're in some kind of surreal dream?

Steve Prohm: I'm very blessed. This is a great program. It's a program where you're expected to win, graduate your student athletes, and compete for championships. We have great upperclassmen who have embraced what we're trying to accomplish and led our younger players. But it's a great feeling to be ranked 20th in the country and have our highlights pop up on Sports Center. This can't be the pinnacle for us though. We have to continue to want more and continue to try to find ways to get better because our ultimate goal is to win a championship and play deep in the postseason.

RI: After the win at Memphis, Jewuan Long said that he wasn't surprised and that he had told you before the season began that he thought you could beat every team on your schedule.

SP: He thinks like that. I met individually with all the players after the Canada trip and he told me he wanted to do whatever he could to help the team and that he thought we could win every single game. When you've won all your life like he has, you're the toughest player on the team, and defend the other team's best player night in and night out you have to have that kind of attitude.

RI: Have the media demands on your time picked up significantly since you've been ranked?

SP: It was really hectic when we first got ranked. This past week it wasn't as hectic. But any time you're getting attention from the media that's a positive thing. It's positive for our players and our program and it's positive for recruiting.

RI: Can you tell that being ranked has had an impact on recruiting?

SP: Yes. Our assistant coaches have done a good job of staying  in  contact  with  prospective  recruits  and  their  coaches. Anytime  you  beat  Memphis  at  Memphis  that  gives  you  some credibility down in that city which produces very good players.

RI: We were talking about Jewuan a little earlier. He seems to have taken his game to another level this year. He's always been a good defender but this year he's also shooting the ball well from the perimeter.

SP: He's really taken a big step up for us in all areas. His role had to change. I was hoping he would be able to find a niche so he could score some points for us and he has done that. He is taking great shots, guys are finding him in transition and off of penetration. He's very good in transition and he's very good off ball-screens getting in the paint.