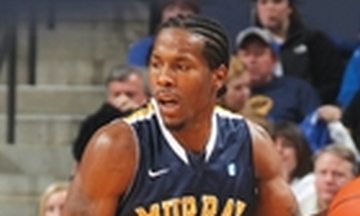 Ed Daniel might be the most athletic player to ever run the floor for the Racers. He can jump out of the gym; he has very quick hands; and he might be the quickest post player in the Ohio Valley Conference.

But that's not what makes him unique. Daniel is unique because he's also one of the smartest players on the floor.

ōEd has a great basketball I.Q.,ö MSU head coach Steve Prohm said. ōHe helps everyone defensively by blocking shots and taking charges. He realizes what we want to do on both ends of the floor at all times. He's tough and he always plays hard.ö

And yet, if he'd had his way Daniel might be chasing down quarterbacks for Chris Hatcher instead of blocking shots for Prohm.

ōI started playing Pee-Wee football when I was about eight years old and that was my favorite sport,ö he explained. ōI didn't start playing basketball until seventh grade. I liked football better and that's what I wanted to play. But I just kept growing so I thought my best bet would be basketball.

ōI used to play in the gym and the middle school coach asked me to come out for the team. So I gave it a try and I ended up making it. I started playing AAU a year or two after that.ö

Daniel played for three years at Hayes High School in Birmingham, Ala. Then when the school was closed he played his senior year at Woodlawn.

ōMy coach at Hayes was Steven Ward,ö he recalled. ōHe was a good guy. He went to college at Alabama A & M. He always stayed on top of things and made sure we stayed out of trouble and did everything right.

ōHe would lose his temper at times. But most of the time he was pretty cool and calm. He was really focused on grades and he tried to make sure we did well in class. He would have us over to his house to eat or watch basketball.ö

While at Hayes, Daniel played alongside the highly regarded Eric Bledsoe. Bledsoe went on to star at Kentucky and currently plays for the Los Angeles Clippers.

During the summer between his junior and senior year, Daniel played in the Adidas Top-150 camp. To his surprise he was named ōMost Athletic.ö

ōJust playing there was a great experience,ö he said. ōI tried to play my game and I was determined not to be intimidated just because someone was being recruited by a big name school. But I was surprised they picked me because there were a lot of great players there.ö