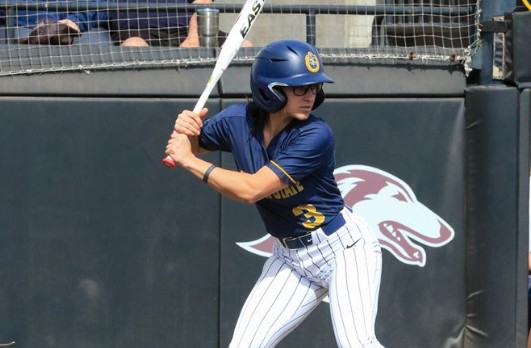 It was a tale of two games for the Murray State softball team Saturday afternoon at E.S. Rose Park in Nashville, Tennessee. The Racers jumped on the Bruins in game one for a 10-1 win, however in game two, it was Belmont that found the offense and took down the Racers, 12-5.

After entering the day tied atop the OVC standings, the Bruins and Racers remain tied after Saturday at 10-3. Plenty will be up for grabs Sunday, as the winner not only nabs the overall series win, but also gains sole possession of first place in the league with four weeks remaining in the regular season.

Belmont was first on the board in the contest with an RBI single from Abi Ledbetter in the first. However, that would be the only run allowed by Hannah James in the game, as she finished the day allowing no earned runs on four hits with nine strikeouts.

Offensively, it was the Gracie Osbron show, as the junior accounted for five of Murray State's 10 runs in the game. Osbron started her big game at the plate in the fifth with a solo home run, then turned it up to 11 in the sixth with a grand slam. She is now the 13th Racer in program history to home twice in the game and is the 16th different Racer to hit a grand slam.

Logan Braundmeier also had the hot bat in game one, as she had both a double and a single with three RBIs, while Jensen Striegel was 3-for-3 with three runs.

In the second game, the Racers scattered nine hits and five runs across seven innings, but could never find a true rhythm. Defensively, it was even worse for the Racers, as three MSU pitchers combined to allow 12 runs on 15 hits with five walks and just four strikeouts, in addition to miscues by the Racer fielders.

Osbron, Sierra Gilmore and Logan Braundmeier were each 2-for-4 with a double and an RBI in the game, while Braundmeier and Gilmore also scored a run.