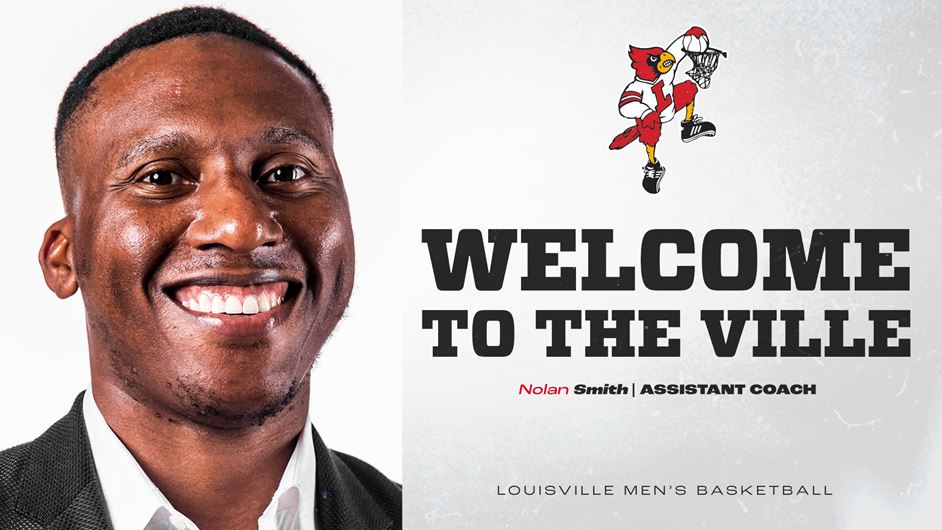 "I'm thrilled to welcome home one of the brightest young stars in the college basketball world," said Payne.  "Nolan brings a wealth of knowledge and experience from one of the premier programs in the country, as well as having worked with and beside one of the best coaches in the game in Mike Krzyzewski.  Nolan's character, love for young people and work ethic will be a major asset for our basketball program and this university.  His father is looking down on us smiling, because his blood and spirit are running through this program once again."

Smith has served as an assistant coach at Duke for the last year after previously working as the Blue Devils' director of basketball operations and player development for three seasons (2018-21), as well as two years as the team's special assistant (2016-18).

"They say second chances don't come around often; so the opportunity to officially say, 'I am a Cardinal,' I couldn't pass up," said Smith.  "As a young boy growing up in Louisville, I was taught early the rich history of Louisville Basketball and the deep pride that comes with it.  It is with that same pride that I have taken this opportunity to join Coach KP's staff.  To echo what Coach KP said in his press conference, it is an opportunity to come home and do something special in a community that we hold so dear to our hearts. We will dedicate ourselves day-in and day-out to our players and the Louisville Basketball community."

He helped Duke achieve the 2010 NCAA Championship while earning Most Outstanding Player honors at the NCAA South Regional in Houston and All-Final Four Team accolades in Indianapolis.  The Upper Marlboro, Md., native ranks 17th on Duke's career scoring chart with 1,911 points as Duke posted a combined 121-22 record, the fifth-most victories for a player at Duke and sixth in ACC history.  Duke had a collective 65-2 record (.970) at Cameron Indoor Stadium in his career there to set program records for both home wins and winning percentage in a four-year period.

Smith won an international gold medal with USA Basketball at the 2006 FIBA Americas U18 Championship, averaging 9.0 points and 3.5 assists per game.

Following his graduation, Smith was selected by the Portland Trail Blazers with the 21st overall pick in the 2011 NBA Draft.  He played four seasons in professional basketball in the NBA, G-League and abroad.

In the summer of 2016, Smith was named the North Carolina state ambassador for Teen Cancer America. TCA is an organization designed to help bridge the gap between pediatric and adult oncology care.  In addition to his work with TCA, Smith has invested time in raising awareness of social justice issues and was named a George H.W. Bush Points of Light Inspiration honoree in 2020. He was also recognized as the Tar Heel of the Month in October 2020 by the Raleigh News & Observer, awarded to a citizen that has made significant contributions to North Carolina and the region.

Smith has family ties to Louisville basketball.  His father Derek Smith was a member of Louisville's 1980 NCAA Championship team and is seventh in career scoring at UofL with 1,826 points.  Derek, who passed away on Aug. 9, 1996, is one of 20 Honored Jersey recipients for the Cardinals and is a member of the UofL Hall of Fame.  Smith was the leading scorer (15.7 ppg) on Louisville's 1982 NCAA Final Four team.  He played nine years in the NBA from 1982-91 and scored 5,232 career points in the league.

Nolan was born in Louisville and spent summers in the city until he was eight years old.  His mother Monica is a Louisville native and both she and his sister Sydney are UofL alumni.

Smith and his wife Cheyna have a young daughter, Camryn, and a young son, Derek.