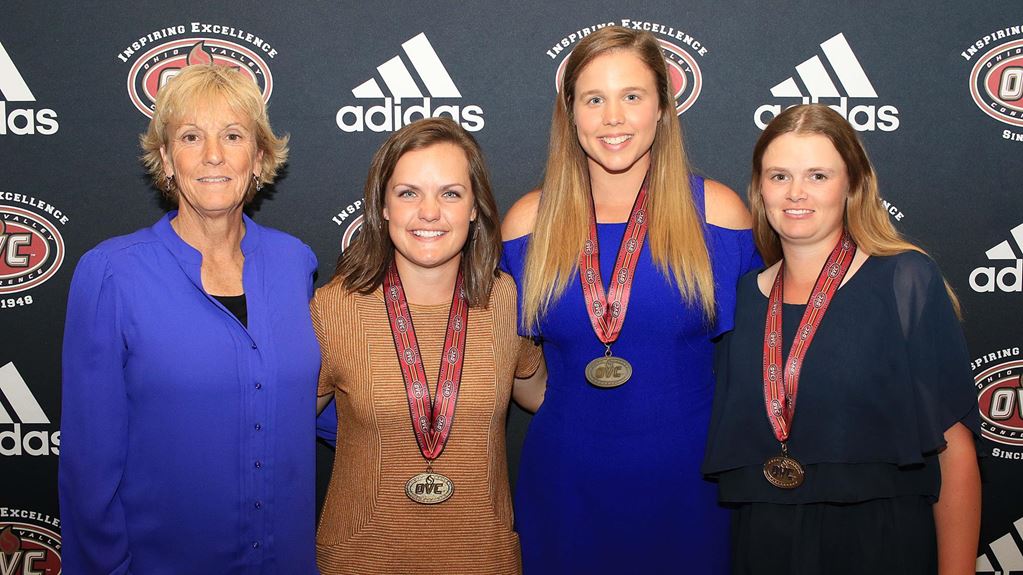 The Murray State Racers had three student-athletes named to Ohio Valley Conference Women's Golf postseason honors as announced Monday during the awards banquet at The Marriott Convention Center in Florence, Alabama. The 2019 awards were handed out after round one was finished at the OVC Championship at the Shoals Golf Club in Muscle Shoals, where the Racers held down first place after the opening 18 holes.

Leading the way for the Racers was senior Linette Holmslykke and MSU graduate student Anna Moore, who were each named to the 10-player All-OVC Team. Additionally, freshman Sara McDowell was named to the All-OVC Newcomer Team.

Holmslykke, from Vejle, Denmark, was the scoring leader in the OVC as the week began at 73.1. A model of consistency this season, she has five finishes of second place including her last time out at the Jan Weaver Invitational (April 5-6) at Miller Memorial GC where she fired a 3-under-par 69 in the opening round. Holmslykke started last fall with four runner-up finishes in a row. Her season-low round came this spring at the John Kirk Intercollegiate in Georgia when she carded a 4-under-par 68.

Moore, out of Hopkinsville, Ky., had a tremendous summer of 2018 and that led to a fall season in which she placed sixth at the APSU Intercollegiate. She placed first this spring at the Citrus Challenge in Florida and posted her best scores of her senior season with 2-under-par 70.

McDowell, from Murray, Ky., is a redshirt freshman and quickly made a statement in her second collegiate event at the Chris Banister Classic in Alabama with a fourth place showing which included a solid finish of 1-under-par 71. In the spring at the Fred Marx Intercollegiate in Louisiana, she placed first on back-to-back scores of 72.

The OVC Player of the Year award will be named following the conclusion of the 54-hole tournament Wednesday.