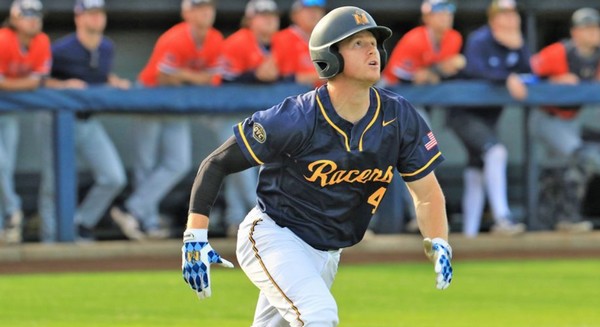 Murray State (19-18) baseball took the first game of their series with OVC leader Eastern Illinois 17-10 on Friday at Lake Land College in Mattoon, Illinois. In the offensive battle, the Racers hit six home runs, tying them for second in school history for single-game homers.

The Racers offense collected 18 hits on the day with six different players having a multi-hit performance. Parker Estes and Alex Crump led the firepower with three hits and a home run for each of them. Lead-off man Jake Slunder also put together three hits on the day. Bryson Bloomer, Drew Vogel, Seth Gardner, and Jordan Holly all blasted a home run in the contest to join Estes and Crump. Bloomer was the top RBI man on the day with four to go along with two runs scored.

-Murray State blasted six home runs in the contest to tie them for second in school history for single-game HR's.

-The Racers set the single-game home run record a season ago versus EIU with seven.

-Jacob Pennington tossed 10 strikeouts in relief for the most by a Racers pitcher this season.

-Murray State has now won four consecutive OVC games to bring them to 5-8 in conference play.