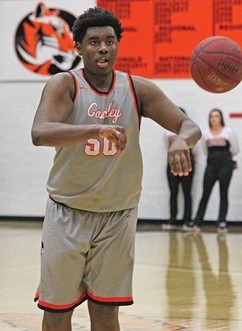 Cowart, originally from Chicago, will be a junior with the Racers in the 2017-18 season.

"We are very excited about the opportunity to coach Darnell at Murray State," said McMahon said.  He is a really good basketball player who will bring tremendous skill level to our team.  He has great hands, great feet, and can score in a variety of ways.  Darnell is coming off a terrific sophomore season at Cowley County and we can't wait for his arrival on our campus this summer."

"Off the court, he's an incredible kid," Coach DeSalme said. "He's good to everyone, he's a special young man that gets it and he's a tremendous communicator. On the court, Darnell is more than a post player, because he can do a lot of things; he's a great passer, but he can shoot it well and he's a competitor. I think the Racer fans will love him. Darnell is as skilled a player that I've ever had. Coach McMahon and his staff did a great job in recruiting him and he's right where he needs to be at Murray State."

As a freshman in the 2016-17 season, Cowart played at Glendale Junior College in Arizona where he averaged 12.0 points and 8.1 rebounds per game and played for Coach Damin Lopez.

Looking Back - Will Snodgrass