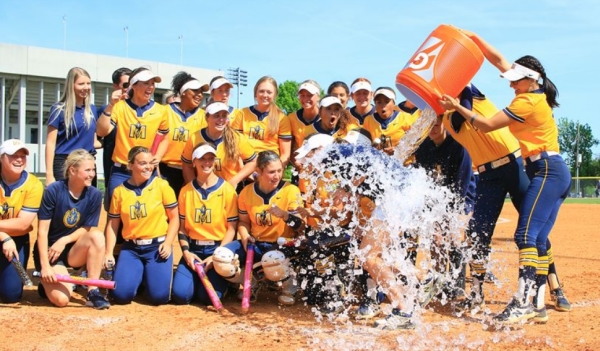 With a win in game two of Sunday's doubleheader with Morehead State at Racer Field in Murray, Kentucky, the Murray State softball team claimed the 2022 OVC Championship, the first in program history.

The Racers dropped game one to the Eagles, 1-0, but came back and won game two 5-2. With two losses by Belmont Sunday, Murray State became the outright winners of the league title and secured the No. 1 overall seed in next week's OVC Softball Championship at Choccolocco Park in Oxford, Alabama.

• Nothing went the Racers' way in game one Sunday, as they tallied just one hit in the 1-0 loss to the Eagles. Madi Ogden got the one-hit shutout win for Morehead State in the game, finishing the game with seven strikeouts.

• In game two, the Racers scored early and often, scoring runners in the first, second, fourth and sixth innings. Murray State outhit the Eagles, 7-3, in the contest.

• Jenna Veber went the distance for the Racers and gave up one earned run on three hits with two strikeouts and no walks.

• Lily Fischer was 2-for-2 on the day to lead MSU with two runs, a double, a stolen base and a hit by pitch, while Taylor Jackson was 2-for-3 with two RBIs and a home run.

• In game one, Hannah James struck out seven to cross the 200-strikeout threshold on the season and currently stands at 206.

Murray State begins its quest for its first-ever NCAA Regional appearance Thursday at 12:30 p.m. at Choccolocco Park in Oxford, Alabama against an opponent to be determined. The Racers will not enter the OVC Tournament until game six, of a possible 13, after receiving a double-bye as the No. 1 overall seed.