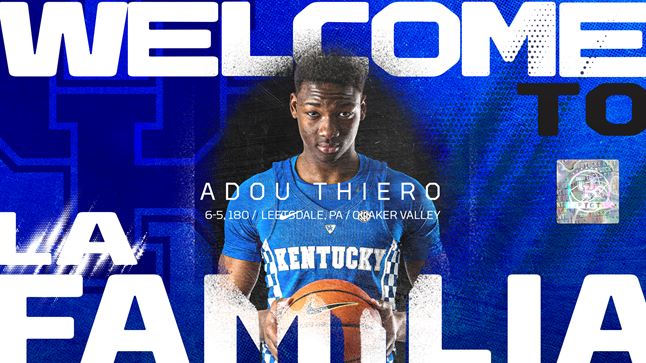 Combo guard and a fast-rising prospect, Adou Thiero (uh-DUE THEE-air-oh) has signed a National Letter of Intent with the Kentucky men's basketball program.

He is the third member of UK's 2022 signing class joining top-10 prospects Cason Wallace and Chris Livingston who inked with the Cats during the fall signing period. Thiero is UK's fourth newcomer for 2022-23 after the addition of Illinois State transfer Antonio Reeves signed on Thursday.

"I am excited to have Adou join our program. He is a great kid who comes from a terrific family," UK head coach John Calipari said. "Adou is a winner who fought through some adversity last summer and then led his team to the state championship game. Much like Dom (Hawkins) and Derek (Willis), Adou understands the grind and process of development here. He knows nothing will be easy, but he has great size and has the makeup of the kind of guard who excels here, someone who can play on the ball or off and can finish at the rim in a variety of ways. I can't wait to coach him and help him reach his goals."

The 6-foot-5, 180-pound combo guard averaged 23.3 points, 10.3 rebounds, 5.9 assists, 3.9 steals and 2.3 blocks per game and directed Quaker Valley to a 27-1 record and a 14-0 mark in league play. Thiero scored 18 points in the 2022 PIAA Boys' Basketball Championships in the team's only loss of the season against Neumann-Goretti. He finished his career with 1,624 career points which ranks as the third most in team history.

With Thiero leading the way, Quaker Valley averaged 72.2 points per game and limited opponents to 51.5 for the season. For his efforts, Thiero was named the 2022 TribLive HSSN Boys Basketball Player of the Year.

"Ever since I went to my first Kentucky men's basketball camp I've wanted to go to Kentucky," Thiero said. "My whole life I've been working to get here and when I got this opportunity, I knew I was going to take it because I just liked how Coach Cal is able to develop guys into pro players. He has always been great to his players and my dad played for him, so he had great things to say about him. I know Coach Cal and the staff will be able to help me get to where I want to be. This is a once in a lifetime opportunity and I can't wait to get on campus and work to improve my game and help make this team better."

Thiero had a 44-point performance against Hopewell which snapped the school's single-game scoring record. He also scored 40 points against Highlands in the Pittsburgh Basketball Club Showcase.

In a state tournament second-round victory against Belle Vernon, Thiero had 21 points, 10 assists, 10 boards and blocked seven shots. Another eye-popping performance came in the WPIAL Class 4A championship where he had 31 points, 17 rebounds and seven blocks in the win.

The WPIAL championship was the Quakers' second in school history and the first since 1997.

Thiero is the son of Almamy Thiero who played for Calipari at Memphis from 2003-06 and Mariam Sy Thiero who was drafted No. 33 overall by the Washington Mystics in 2006 after staring at Oklahoma City University.