Where Did We Get the Name Racers? 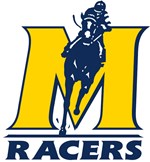 "What's in a name? That which we call a rose by any other name would smell as sweet."
William Shakespeare, Romeo and Juliet

Rainey T. Wells first gave the athletic teams the nickname of Thoroughbreds in June of 1928, according to Dr. Carr’s history of the early days of the university. In a day when Man O War was a household word and the horse remained a nostalgic symbol it was a perfect nickname. But times change, and fans response to symbols also change. Athletic team followers, remaining in sync with their teams constantly, throw out variations of the original nickname as they excitedly describe the team they cherish. They do the same for the players. The wordsmiths of the day, consisting primarily of reporters and broadcasters, quickly adopt the nicknames they hear and perhaps originate on their own.

Murray State was no different. Reading accounts of Racer teams in newspapers, yearbooks, media guides, and listening to “old timers” remember, one finds a constant search for nicknames.

The variations of the nickname Thoroughbreds came early as local sportswriters seeking to humanize the horse nickname referred to the basketball team as the “Men O’ War.” That name didn’t seem to stick, and a rather common nickname began to emerge both in the sports pages and in the yearbooks—it was “The Racehorses.” After a few years that name was shortened simply to “Hosses.” During Harlan Hodges coaching tenure when his teams began fast breaking the nickname “Hodges Hosses” was commonly used. Some creative writers seized on the Race Horses theme and began writing about the “Ramblin’ Racehorses”

Also in the 30’s some erudite sportswriters, utilizing the English idiom for nobility or more probably referring to the bloodlines of a thoroughbred, nicknamed the team the “Bluebloods.”

As late as the early fifties some used the well-known term “Big Blue” as a nickname, and it was not unusual to see the term “Big Blue Netters” when describing the basketball team.

It becomes obvious to anyone writing about the team that the nickname “Thoroughbreds” is simply too long. It takes forever to type it, and even longer to make sure the spelling is correct. Surely many thought that in the day of airplanes and automobiles it was no longer a “horse and buggy” world.

Some tried to satisfy the spelling and the length problem by simply calling the team the “Breds.” That word had little meaning really, but it served as a reminder of the original name and many continued its use.

Then the word that has stuck for over 58 years evolved. The teams led by Bennie Purcell and Garrett Beshear began creating great excitement on the national stage by traveling to New York, Connecticut, Louisiana, and Texas to play. Murray publicity director Erl Sensing’s always creative mind began diligently seeking a new name to describe the Murray team that was averaging eighty to ninety points a game. The name Thoroughbreds simply didn’t seem to fit. Besides it was simply too long.

Sensing had come to Murray in 1947 and was a tireless worker and destined to make quite a mark before he left in 1954. He was central in establishing the famous North-South classic at Murray and those who knew him said, “He wrote more copy than any two newspapermen in the state.”

Sources close to Coach Harlan Hodges gave Sensing the credit for originating the nickname “Racers.” His label took root, and in the January 28, 1952 edition of the sports page of the Paducah Sun Democrat Edd Kellow writing in a column he labeled “Timeout” publicly proclaimed the Murray team as the “Racers.” The team after a couple of bad games was experiencing resurgence and he described it this way. “The Racers had to win to gain back their self-respect as well as confidence.”

By the time the yearbook was published late in the school year of 1952 the editor of the Shield first used the nickname “Racers” when describing the basketball team. Interestingly in that year book the editor was all over the map and in 4 short paragraphs he used the nicknames, Racers, Breds, Hosses, Big Blue Netters, Race Horses and Bluebloods. But it was the Racer nickname that stuck, and quickly all teams, except the baseball team, began to use it in their literature, and the sportswriters and broadcasters followed suit.