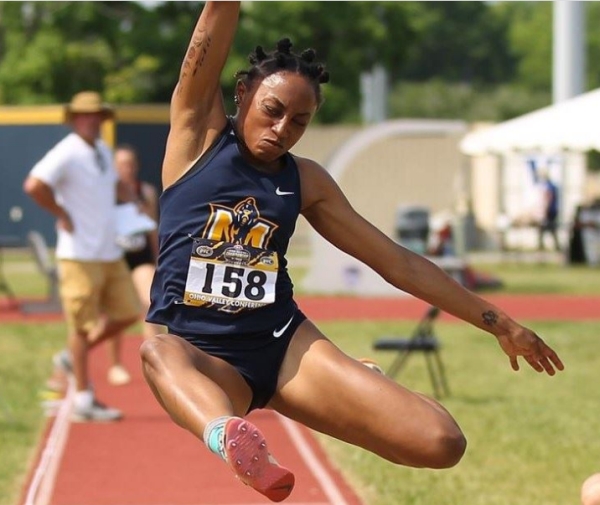 Murray State's Rachel Hagans took a historic leap forward when she became the first Racer in 10 years to advance to the NCAA Outdoor Track & Field Finals after her performance Thursday at the NCAA East Preliminary at Indiana University at the Robert C. Haugh Complex in Bloomington.

A senior from Tampa, Florida, Hagans had three attempts and it was her first, a jump of 6.29m, that got the job done. With the top-12 at the East Prelims advancing to the finals, Hagans was eighth in the IU regional. With two regional sites, a total of 24 long jumpers advance to the NCAA Finals.

Hagans, from Tampa, Florida, will compete at the NCAA Finals at Hayward Field in Eugene, Oregon. Her competition will be held on Thursday, June 9 at 7 p.m. Pacific Time.

Hagans has had a tremendous indoor and outdoor season for the Racers after breaking the 41-year old Murray State long jump record (April 22) at the Kentucky Invitational with an effort of 6.59 meters (21 feet-7.5 inches). The previous Murray State record had stood for 41 years, set by Allison Manley in 1981 at 6.34m. Hagans was ranked 12th nationally going into today's competition in Bloomington. As she helped the Racers win both the Ohio Valley Conference indoor and outdoor championships in February and May, Hagans set the OVC meet record with a long jump of 6.44 meters. At the OVC indoor meet, Hagans won the long jump and the 60m dash and she won the long jump and the 100m in at the conference outdoor meet. She was also part of the Racers' OVC champion 4x100m relay team.

Hagans becomes the first student-athlete from Murray State to reach the NCAA Finals since 2012, when MSU Hall of Famer Alexis Love did it in the 100m where she placed sixth. In the summer of 2012, Love also competed in the USA Olympic Trials in the 100m and the 200m. Love was inducted into the Murray State Hall of Fame in 2019.