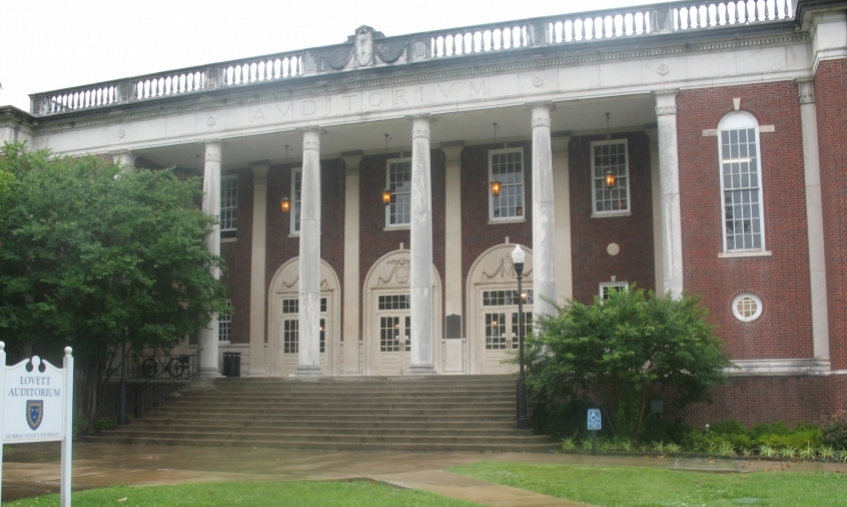 At the base of the statue of Rainey T. Wells, the founder of Murray State University, is a proclamation written by  Dr. C. S. Lowry, a renowned scholar and faculty member.  He wrote of the influence Wells had on the University, “His dedicated service as its second President (1926-1932) endowed it with its fierce pride and undaunted spirit.”

The history of  Murray State basketball is inseparable from the history of the university itself.  Both are the result of the determination of  people, despite the odds against them, to do their best and to become the best they are capable of becoming. Coach John Wooden referred to it as “Achieving Competitive Greatness.”

The university's history began with a story that has become legendary.  Rainey T. Wells, Murray lawyer, state legislator, and chairman of the powerful Kentucky State Tax Commission led a spirited group of Calloway County citizens in 1922 in raising $100,000 to assure that the new Normal School was located in the then small town of Murray, Kentucky. The commission determining the college site had announced that the town receiving the Normal School would be required to raise $100,000 which would be used to construct the first building on the campus. This was a large sum of money in 1922.  Rainey T. Wells presented Murray’s case before the commission and in an impressive ending said to the members, “others have told you what they intend to do; but Murray and Calloway County have already done it.”  Then he dramatically laid two certified checks on the table before the Commission totaling $100,000.

Wells' dogged determination to bring the Normal School to Murray did not end with the commission’s decision.  He later told his grandson Wells Lovett, “I didn’t want Murray to be just any teachers college.  I wanted it to be equal to the great colleges of the country.” He continued his mission by seeking the best educational leader he could find for the school's first president.  In the end he chose Dr. John Wesley Carr, a nationally recognized scholar who was a native of Indiana and a graduate of Columbia University, to become the first leader of the Normal School.

Knowing that institutions are only as good as the people who lead them, both Carr and Wells searched diligently for the best faculty and the best coaches they could find. Politics was not a part of the selection process.  They wanted the very best they could get.

In the 1930's, speech and debate were extremely competitive endeavors, and young men coming out of high school were often skilled debaters.  A debate team was soon established at Murray, and Rainey Wells later told Lovett, “I did not want Murray to have a second rate debate team.  I wanted them to have the best and to compete against the best.”

According to the Murray State yearbook, The Shield, the Murray team debated a squad from Cambridge in 1931, “Before the largest debate audience (2000) ever, the Murray Debaters met Cambridge, England in the most interesting debate of the year. At the request of the English speakers, no decision was given.”

Murray State had only been in existence nine years, and they were competing and winning against the best in the country.

In 1933 the country was mired in the Great Depression.  Murray State and Western Kentucky  were natural rivals.  Before Murray was founded, most people from far western Kentucky seeking a college education went to Western.  It had been founded in 1906 and was an established institution when Murray began offering classes in 1923.

The two schools quickly developed a heated rivalry in basketball, football, and baseball.  In 1932 Western came to Murray and won the football game 6 - 0 before 4,000 fans.  At the time, the football field was immediately north of the auditorium.  Murray had just beaten Louisville 105 - 0, and the loss hurt.

Murray had most of its players back in 1933, and it was undefeated going into the game at Western.  Newspapers, including the Louisville Courier Journal, chronicled the game as one of the great rivalries of the decade.  Governor of Kentucky Ruby Laffoon was in attendance, joining 6000 fans for Western’s homecoming.

Rainey Wells had retired as President, but he still had a fiery determination to make Murray the best.  He arranged for a special train to carry the team, cheerleaders, and fans to Western from Murray.  It was a festive day, and the Murray fan base was hungry for a victory.  So was Dr. Rainey Wells.

During the first half of the game Wells sat in the stands in a prominent seat by his friend, the governor. At halftime he decided he could take it no longer.  He had to go to the sidelines and do anything he could to help Murray win the game.  The story of Rainey T. Wells walking the sidelines and exhorting his Thoroughbreds during the second half has been told countless times.

Wells Lovett remembers the Louisville Courier Journal report,  “Murray’s goal line stand has never before been equaled in the history of the state. Some of the Murray players would have died in their tracks if necessary to stop Western.”

“Granddaddy always spoke of that day with great pride.” Lovett said.  Murray came away with a hard fought 20 – 6 victory.