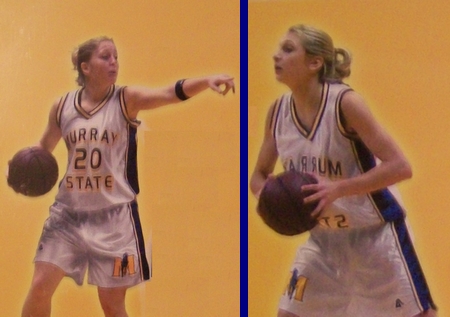 It's been said that the best thing about freshmen is that they became sophomores. But, while many freshmen may have to learn the ropes in college before they can make a major contribution, that hasn't been the case with the Lady Racers' Brittany Park and Rebecca Remington.

From the very first game they've been among the team's leading scorers and they quickly became fixtures in the starting lineup.

"For two freshmen to play like they have is unbelievable," head coach Eddie Fields said. "They're consistently scoring for us, night in and night out. But, the main thing is - they know how to play the game."

Remington, a 5-9 guard, is the team's second leading scorer at 10.2 points per game, and she's second in rebounding at 5.4 per game. She's reached double figures in 10 of the Lady Racers' first 15 games and is shooting an incredible 48.6 percent from three point range.

The Ohio Valley Conference has selected Remington as it's Rookie of the Week three times this year.

Park, a 5-8 guard, is third on the team in scoring at 9.2 per game and second in steals and assists. She's reached double figures eight times this season, and is seventh in the OVC. in 3-point percentage. Her assist to turnover ratio is better than 2-1, and is the best on the team.

Coming off a 7-20 season one might think it odd that Fields was able to recruit players like Park and Remington. But, last year's record didn't even play a role in their decision to sign with Murray State.

"I knew their record wasn't very good," Remington noted. "But, that didn't bother me at all. Every year is different and things can change quickly."

Park is from Indiana, the only state whose deeds are required to indicate whether a lot has a basketball goal.

"I grew up in Indianapolis and then I moved out to the country." Park recalled. "I still went to school in Indianapolis, although it was a pretty long drive. Where I live in the country it's kind of farmy with fields all around - barns and tractors and all that stuff. But, there was always a basketball court wherever I moved.

"But, I'm a city girl. I like all the bright lights, big buildings and all the people."

Park started playing basketball in the first grade. The local youth league was supposed to be for third, fourth and fifth graders, but they let her play anyway. And, while she was growing up she played frequently with her late father, Jim Park, and her brother Jason.

"My Dad and my brother were big sports fans and we played basketball a lot," she said. "I beat my brother all the time."

Park played high school basketball at Decatur Central in Indianapolis where she started all four years, earned All-State honorbale mention three times, and made the All-Metro team four times. With her leading the way, the Hawks won conference titles in 1999 and 2000.

"My high school coach, Jill Merriman, was the kind of coach everyone wants to have," Park said. "She's always there for you when you need her. You can call her anytime you want to. She knows basketball and makes sure you get it done and if you don't, she helps you so that the next time you will get it done. She never yelled or screamed, but she'd stomp her heels during a game to get our attention."

Park first heard from Murray State midway through her senior year, and she says Fields sold her on playing for the Lady Racers.

"Coach Fields is one of the main reasons that I came here," she said. "He makes you feel like you should be here and that he wants you to be here. He really encourages us, particularly in practice. And, anytime a coach tells you to shoot it or you're coming out, that's a guard's dream. He really wants us to take open shots. If you shoot it, you have less of a chance of turning it over.

"Coach (Sabrina) Dial is really good. You have to have a girl in there for a girls' team. You can't have all guys for coaches. It had to be hard for her though, coming in not knowing anyone. Coach (Rob) Cross is the one who's always there to tell you it's okay even though you made a mistake."

Being a city girl, Park does admit that living in a small town like Murray has been something of a culture shock.

"Coming from Indianapolis, Murray is kind of hard to adjust to," she said. "But most of the time you don't really realize how small the town is because you're always going to school, or practice, or hanging out with the team. If you're having fun it doesn't really matter how big the town is."

Of course, when she signed with MSU she didn't expect to start as a freshman, although she knew that she'd have a chance to earn playing time.

"I had no idea," she said. "But, it's neat to come in and start as a freshman. It doesn't really matter to me who starts, though. It matters more who's in at the end of the game in a tight situation when you need it the most. But, I think everyone on the team has the potential to start."

Like most girls who play college ball, Park has also had to adjust to playing before sparse crowds after playing in packed gyms when she was in high school.

"To me it really doesn't matter," she said. "If they don't want to be there then they're not going to come. We're not really there to play for them. We play for ourselves. It really doesn't bother me that much, but it would be good to have more people come to our games."

What does matter to Park is winning. More than any individual accolades or honors that might come her way, she wants to win. That's why her goals are all team goals.

"I have goals for the team," she said. "I want to make it to the conference tournament in Louisville. And, I want to have a winning season."

Those goals will be difficult to reach. The Lady Racers were picked seventh in the conference in preseason balloting by the league's head women's basketball coaches and sports information directors. And, they didn't have a single player earn even honorable mention in the preseason All-Conference selections.

Of course, unlike Division I football, polls are irrelevant in college basketball. It's what you do on the court that counts and for the most part the Lady Racers are playing like they're intent on acheiving Park's goals.

Off the court, Park is an avid soap opera fan.

"I have to read my soap opera magazine," she said. "I'm hooked on Days of Our Lives. Every now and then I catch Passions. And, sometimes I watch General Hospital and All My Children. But, Beverly Hills 90210 was my favorite T.V. show and I cried when it went off the air because I wasn't going to have anything to watch on Wednesday nights anymore."

Remington grew up in Scandinvia Wisconsin, a town of 307 located about 80 miles west of Green Bay. And, like Park  her family played a large part in developing her interest in sports.

"My parents are really into sports," she said. "We played kickball together and played basketball together - soccer, volleyball, a lot of active things. Now that my Dad's getting older I'm starting to beat him in basketball. He knows his time of beating me is over.

"We also do a lot of cross country skiing. We have some land and we've made trails on it. And, there's a big ski hill in Iola. We ski there too."

Remington began playing basketball in the fifth grade. She started three years in high school. And, when she was a junior, Iola-Scandinavia made it to the state tournament for the first time since her mother was on the team.

As a senior, Remington averaged 24 points, was the Central Wisconsin Basketball Player of the Year and an All-State honoree. Her AAU team finished fifth in the nation when she was a junior and placed seventh last year.

"AAU played a big factor in helping develop my skills," she said. "The conference my high school played in wasn't very strong. So, I had to work hard in the summertime to get good competition and play against other good players. And, it was through AAU that coach Fields heard about me."

While in high school, Remington also ran track and played volleyball. She won state championships in the 400 meter dash, the long jump and the triple jump, and led the volleyball team to the state tournament for the first time in school history.

In fact, the story that best illustrates her toughness involves volleyball.

"As a freshman, she broke her finger twice and had to miss a lot of volleyball," her mother told the Appleton Post Crescent. "She came back near the end of the season and played well despite not playing all year. Before the following year, she went to camp. She worked twice as hard to be a starter as a sophomore."

During her senior year Remington was contacted by several colleges, but the only two that she seriously considered were Holy Cross and Murray State. Her visit to Murray sold her on joining the Lady Racers.

"When I came down on a visit I really liked the school," she recalled. "It was my top choice after I visited here. I had been looking at Holy Cross and there were some other schools that were interested and wanted me to visit. But, I just wanted to make my decision and I liked it here so I didn't take it any farther.

"I really liked the coaching staff. They seemed really enthusiaistic about the coming season. And, they just really made me feel welcome."

Although Murray is much larger than Scandinavia, Remington enjoys living here and says that in some ways the lifestyle isn't very different from what she's used to.

"I like Murray a lot," she said. "It's a much bigger city than what I'm used to, though. We're close to Nashville and Paducah if you want to go shopping. And, I'm used to that because we had to drive to Stevens Point to go shopping. Of course, there are also things to do here. And, we keep each other busy."

Although she's been a major factor in the improvement the Lady Racers have shown this season, Remington deflects the praise and credits her teammates.

"There's really good chemistry on the team this year," she said. "Everyone gets along and there's good communication. Everyone's trying to make a difference - going out on their own and getting more shots in, just making an extra effort."