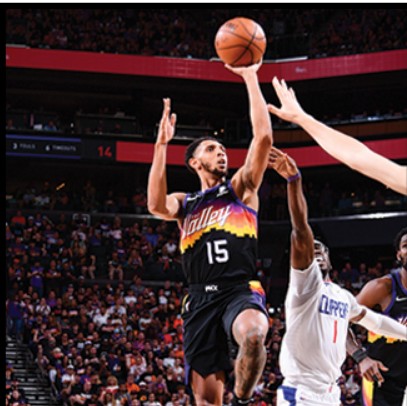 2020 Murray State Hall of Fame selection, Cameron Payne, punched his ticket to the NBA finals Monday night when his Phoenix Suns defeated the Los Angeles Clippers to win the Western Conference championship four games to two. The 130-103 victory for the Suns was played at the Staples Center in California.

With his team advancing to the NBA Finals, Payne becomes the third Murray State player to make it that far. The first two were Joe Fulks and Dick Cunningham, both MSU hall of famers inducted in 1965 and 1986.

Payne, who was a two-time All-Ohio Valley Conference selection for the Racers from 2013-15 and 2014 OVC Freshman of the Year, has found great success in Phoenix where he is part of a team that is now 12-4 in the postseason. In Wednesday's series winner, Payne played nearly 15 minutes and scored seven points to go with seven assists. When the team needed him to step up in the absence of Chris Paul in game two, Payne came through big with a career-high 29 points on 12-of-24 from the field to go with nine assists. The win put the Suns up in the series 2-0.

Payne and the Phoenix Suns now wait to see which team they will meet in the NBA Finals. The Milwaukee Bucks and Atlanta Hawks are tied two games each in the Eastern Conference finals. They play game five of their series Thursday (July 1) in Milwaukee.

Fulks played when the league was called the Basketball Association of America (BAA) in the 1940's. He was on a championship team in 1947 with the Philadelphia Warriors with a 4-1 series win over the Chicago Stags. In 1948, Fulks and Philly made it to the BAA Finals, but lost 4-2 to the Baltimore Bullets. A WWII veteran, Fulks played at Murray State from 1941-42, served in the Marine Corps and then restarted his basketball career in 1946. Fulks played in 489 career games, all with Philadelphia and was named to the NBA's Silver Anniversary Team in 1971.

Dick Cunningham, who was part of the Milwaukee Bucks NBA Championship in 1971, led the nation in rebounding for the Racers with 21.8 per game in 1967. He was drafted by the Suns in the second round (21st overall pick) in 1968, but was traded to the Bucks where he played for three seasons. After one season in Houston, Cunningham played three more seasons in Milwaukee with his last of 358 career games coming in the spring of 1975.