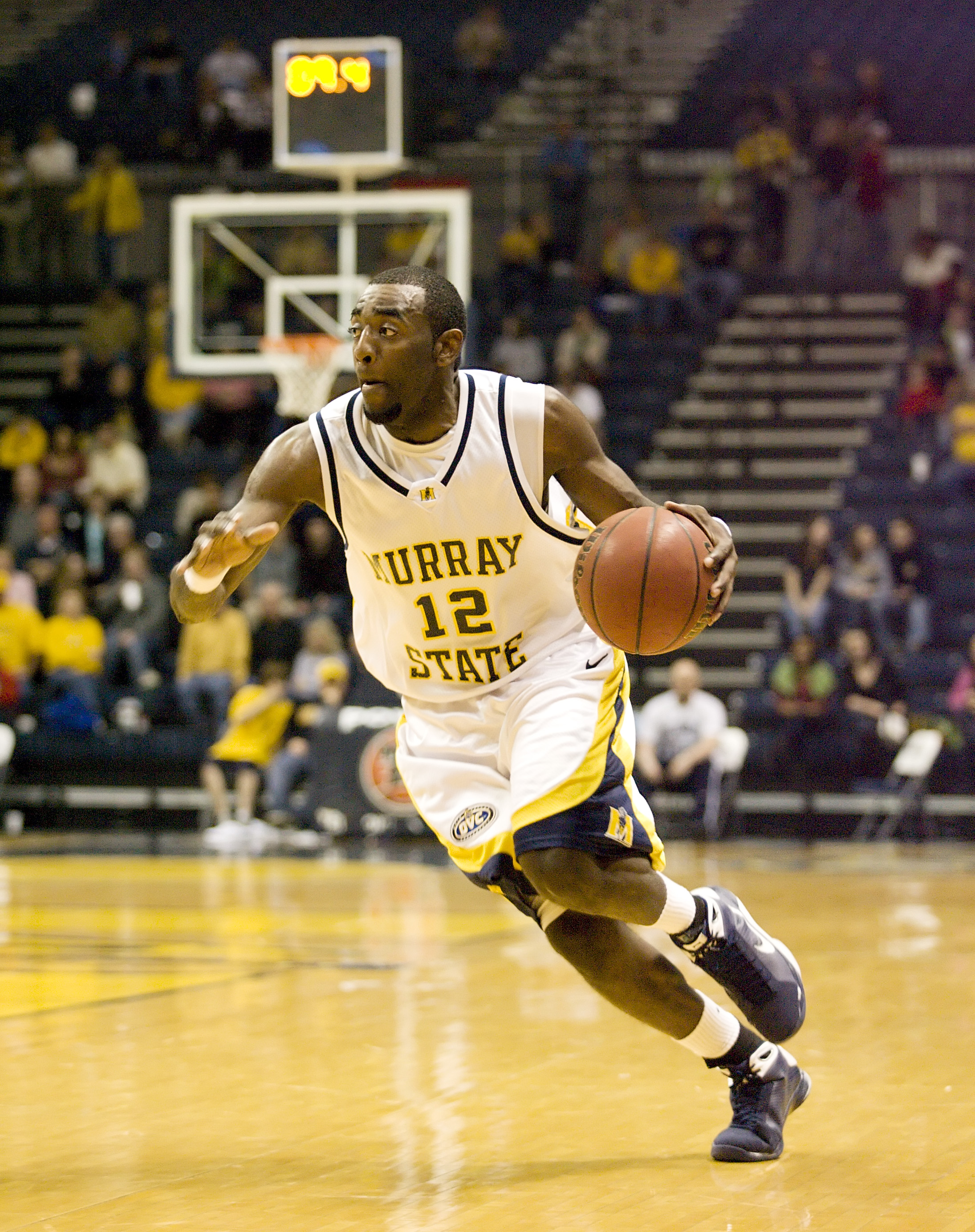 Danero Thomas will be remembered for two things – the smile and the shot.

Thomas was, without a doubt, one of the most affable players to ever wear a Racer uniform. The easy going young man from New Orleans always had a smile on his face and joy in his heart. And he always had time for fans, whether that meant signing autographs or just talking hoops.

Ironically, the road he traveled to get to Murray State was anything but easy.

"It was kind of rough growing up," he said. "There were seven of us and only four bedrooms. I went to a public school in elementary, middle and high school."

Now it may sound odd that he would emphasize having gone to public school. But private and parochial schools were numerous in New Orleans before Hurricane Katrina. Few people went to public school unless they had no other choice.

Thomas grew up playing football and thought he was going to be a star quarterback.

"I really enjoyed it," he recalled. "It was my first organized sport and I had trophies and everything. I played quarterback and strong safety, and I won awards for Most Valuable Player, Defensive Player of the Year and things like that.

Thomas started playing basketball when he was in middle school.

"When I was in the eighth grade we won the national championship," he said. "Miss Gay was our coach and I loved her to death. It was kind of odd though, being coached by a woman, because she tried to be really rough on us. But she couldn't because she was a lady.

"She knew what she was doing though. She called me Big D. When I graduated she gave me this big picture of me and her, I still have it today."

When he was a high school freshman, Thomas expected to play for the junior varsity. And he did, for two games.

"I scored like 40 points in each of those games so they moved me up to the varsity," he recalled. "My coach, Brian Simmons, said I was too advanced to play J.V.

"He was the best coach I've ever been around. He was out there cheering us on every day. He would get on you, but he really just wanted you to be the best you could be. And he emphasized defense. That's probably why I am the way I am now. On the defensive end I'm really active with my hands and I learned all that from him.

"My freshman year we made it to the state championship, but we lost. My 10th grade year we went back to the championship and we won. Then my junior year we lost in the third round,"

"I was going to be the only senior playing with a bunch of freshmen and sophomores and he thought Mount Zion prep school would be good for me," Thomas said. "But he left it up to me and when I decided to go it made a lot of people mad.

"I think it was good for me though because when I was in New Orleans I didn't have many schools recruiting me, just Louisiana Tech, Mississippi State, Tulane and New Orleans

"But when I went to prep school, my first year I averaged like 17 points. I was the second leading scorer, behind Brandon Rush. I could have signed with Georgia Tech my first year there. Paul Hewitt told my coach - 'I want him to sign now.' But I wasn't really sure about it so I just wanted to wait until my senior year to make a decision like that."

Between his first and second year of prep school Thomas would have to endure more hardship. While he was home for the summer Hurricane Katrina almost wiped New Orleans off the map.

“It was like a nightmare,” he recalled. “My mom had planned on taking us to a hotel to ride out the storm. But as it got closer she said she had a bad feeling about it. And so we left. We just packed like we were going to be gone for a weekend though. I think I took two pair of jeans. The roads were jammed with cars and it was so hot. It was very uncomfortable but we made it to Atlanta where we could stay with family.

“My mom went back a couple of months later and she said there was a ring on the walls where you could see how high the water got. The beds were split in half and there were snakes and dead fish in the house. It was a mess.”

During his final year of prep school Thomas averaged 14 points, six rebounds and four assists. And Mount Zion was ranked in the top five in the nation. He also set a school record by hitting nine three-pointers in a game against Gulf Shores High School.

At the end of the season he had offers from Virginia Tech, LSU, Illinois, and Miami (Fla.).

"I was going to Miami because of Coach (Billy) Kennedy," Thomas said. "Then he called me and said he got the head coaching job here. I had never heard of Murray State before. And I didn't even take a visit up here because I signed late. But I knew I wanted to play for Coach Kennedy."

"I had friends at bigger schools who wound up sitting on the bench. I didn't want to do that. I wanted to play right away."

Having no idea what Murray State was like, Thomas relied on Kennedy, who was in his first year at MSU, not to steer him wrong.

"Because I didn't visit the campus before I signed, when I got here I didn't know any of the other players," he noted. "But really almost all of us were strangers. It was tough to get us all on the same page. But Coach Kennedy was always breaking us up into different groups and changing room assignments on the road to help us get to know each other. And we eventually pulled it together.

"Shawn Witherspoon, one of the seniors, was a great role model for me. And he stayed on my case man. I was just trying to figure out why he was so hard on me. But he was a great person and a great player."

As a freshman Thomas played in 28 games during the 2006-07 season and started eight times as he averaged 5.1 points. He scored in double figures five times and had a season best 19 points in the BracketBuster game against Rider. But the Racers finished the year with a 16-14 record and lost at home to Samford in the first round of the Ohio Valley Conference tournament.

"I was so confused I didn't know what was going on at the end of that game," Thomas admitted. "But with seven seconds left I saw the seniors start tearing up and I thought - 'Man this is really serious.' I certainly didn't want to lose like that again."

As a sophomore, Thomas became a fixture in the starting lineup as he averaged 12.3 points and 4.9 rebounds. He shot 44.9 percent from the field and 38.8 percent from three-point range. He scored 20 points at Jacksonville State and 19 at Tennessee-Martin.

He also became a defensive stopper as he led the team in steals with 45. And despite being just 6-5, he was tied for second in blocked shots with 19.

The Racers improved to 18-13 overall and made it to the semifinals of the OVC tournament where they lost to Tennessee State 83-75.

"We were determined to get to Nashville and we did that," Thomas said. "So we accomplished what we set out to do. But we were disappointed with the loss to TSU."

During the summer between his sophomore and junior years Thomas toured Africa with an Athletes in Action team that visited Senegal, Mali, and Guinea.

“I saw some children who didn’t have much,” he said. “Your heart just goes out to them, and you want to help them all you can. I left the USA with so much stuff, but the plan was to give it all away."

Thomas said he gave away everything that he took on the trip including shoes, clothing, t-shirts, socks, toiletries and towels.

It was expected that he would take another step forward as a junior and become one of the top players in the conference. He was a first team preseason All-OVC selection. But he struggled, shooting just 42.2 percent from the field and 29.5 percent from behind the arc. He did average a team best 12.5 points to go with 4.3 rebounds per game. He scored 22 points at Indiana State and 30 at Austin Peay. And he led the team in both steals and blocked shots.

At season's end he was a second team all-conference selection. The Racers finished 19-12 as they again lost in the semifinals of the OVC tournament. This time they were blown out by arch-rival Austin Peay 67-50.

“That was embarrassing,” Thomas recalled with a grimace. “But it was one of those nights when we just couldn't buy a basket.”

And the shooting slump? The three-point line was moved back a foot after Thomas' sophomore year. Could that be the reason why he struggled? He doesn't think so.

“You know what I think it was?” he asked rhetorically. “I just stopped working, man. I guess I got overconfident. I had to get back in the gym and work on my shot to bounce back.”

And that's exactly what he did.

“My senior year I started coming to practice 45 minutes to an hour early,” he explained. “I worked specifically on 3's from each side of the court on both ends. I took about 200 extra shots a day.”

As a senior Thomas shot 42.1 percent from the field and 32.5 percent from three-point range while averaging 10.1 points and 4.3 rebounds. He scored 23 points against Austin Peay and was once again a second team All-OVC selection.

The Racers had a magical season as they finished 31-6, the first 30 win season in school history. And they won their first OVC tournament title since 2006 so they were off to San Jose, Calif. to play Vanderbilt in a first round NCAA tournament game.

With 4.2 seconds left Murray State trailed the Commodores by a single point. Head coach Billy Kennedy called timeout and Thomas told assistant coach Amir Abdur-Rahim that he wanted the ball. Kennedy, knowing that Vandy would have scouted the Racers' out of bounds plays, drew up a new one.

“He called a play for Isacc Miles to get the ball and either get to the rim or get somebody open,” Thomas recalled. “When we took it out I set a screen for Isacc so he could get the ball. But as soon as he got it they double-teamed him. So he kicked it to me with a little over two seconds left. I just wanted to get separation. I could see the hand of the defender on my right though so I had to shoot a fall-away but It felt good when I let it go. I knew it was going in.

“And then when it did go in I felt like I had won a million dollars. It was the best feeling in the world. Every day, everywhere I go, someone asks me about that shot.”

That 66-65 victory gave the Racers their first win in the NCAA tournament since 1988. Unfortunately they lost to Butler in the second round 54-52, the closest game the Bulldogs would play before losing to Duke in the national title game.

“If you look at his track record, academically and off the court he was a good student and representative of our school,” Kennedy said of Thomas. “He was always solid and he was one of our best defenders because he could guard a 2,3, or 4. He had size and quick hands which allowed him to get deflections and steals on the perimeter. And although he wasn't a prolific scorer he could explode for a big game at any time.”