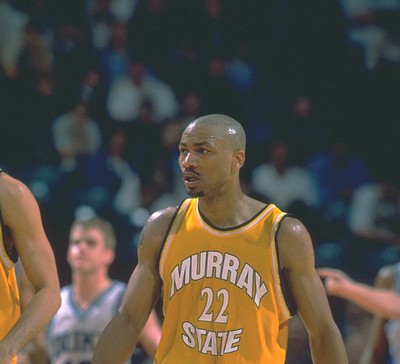 Vincent Rainey was 6-foot-3, maybe 6-4, and a very successful forward at the Division I level.

Believe it or not!

As a mid-major, it has always been Murray State’s lot to turn the undersized into supersized, the meek into monsters, the somewhat-stars into superstars.

But the final X-factor apparently lies inside each player—the measure of heart and soul, the level of guts and determination.

Rainey had plenty of all. He came to Murray State as one of the top five high school players in the state of Tennessee. And, he chose the Racers over the likes of Missouri and Maryland.

“Vincent’s great attribute was his competitive nature. He loved to play the game and he played it with a great passion,” said Mark Gottfried, who coached Rainey during his junior (1995-96) and senior seasons (‘96-97) after Scott Edgar left Murray State to coach at Duquense.

“Vincent was always in the gym, always sweating, always working. He just had a passion, a drive, a desire to be as good as he could be. And I don’t say that lightly. He really was that kind of a person and a player.

“He was an emotional guy. He had a tough home life coming out of Memphis, had a close relative in prison and no dad, so I think his passion became basketball. He lived and breathed it.”

“Vincent wanted to win and he knew how to win,” said Chad Townsend, the team’s point guard during Rainey’s senior season.

Rainey turned his lack of height into an advantage.

“For a power forward to have to guard him was a hard matchup because he was so quick and so crafty around the rim,” Gottfried said. “And he was just stronger and many times, faster than the smaller forwards.”

Rainey’s drives from the wings to the hoop were legendary. He was a blur, lightning in sneakers. He’d push the ball ahead as if playing with a horizontal yo-yo, looking like an NFL receiver stretching the ball forward toward the goal line. First defenders usually fell by the wayside. If some giant of a defender remained, Rainey would stop, coil his knot-muscled legs, and power through, or up-and-over the defense.