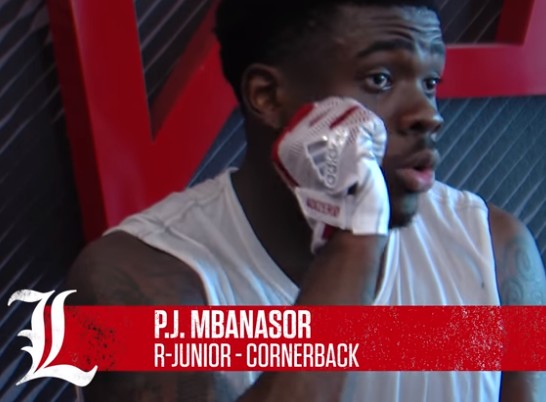 The long wait is almost over for University of Louisville cornerback P.J. Mbanasor.

After sitting out the last three seasons due to his transfer from Oklahoma, the 2018 season opener versus Alabama – the defending national champions – can't come soon enough for Mbanasor.

The native of Pflugerville, Texas, Mbanasor hasn't played since appearing in 10 games at cornerback for the Sooners during the 2015 season. That season, he recorded seven tackles and a pair of pass break-ups for the Big 12 power.

The former four-star recruit is only 27 days away from finally getting back on the playing field against the Crimson Tide on Sept. 1 in Orlando, Fla.

"I'm excited," Mbanasor said. "It's been awhile. I'm trying to be as professional as I can to just come out and do my job. I'm just trying to do everything right so when I do get out on the field I can help our team."

Head coach Bobby Petrino is careful with his praise at times, but he hasn't been shy about his admiration of the secondary. Despite losing four starters, including a first-round draft choice, Petrino feels this group might be the best during his nine seasons at Louisville.

Cornerbacks coach Grady Brown, who joined the Cardinals in the winter, hasn't been with his group of cornerbacks long, but he's been happy with the things he's seen from Mbanasor in the short term.

"P.J. does a great job," Brown said. "He's well-spoken and he brings great length to the secondary. When he's playing at his best, it's great to have length back there in the secondary, especially when defending the deep ball. It's good to have a big, physical body back there."

Mbanasor is trying to learn another defense in his second year in the program, but has enjoyed the aggressive mentality of Brian VanGorder, the team's defensive coordinator.

"I like the mentality of this defense," Mbanasor said. "Everyone has a burden with this defense. There are a lot of 1-on-1 battles with this new defense. Everyone has to do their jobs and execute. We have to focus on 1-on-1 match-ups first and win on every play."

After four practices, Mbanasor has lined up with the first unit, but the veteran defender knows everyone is going to compete for playing time, and he has to continue to work on his technique and just get better with each repitition.

"I don't want to get overexcited and show your inexperience," Mbanasor said. "You want to come out and fit your roles and make plays, while also being a leader. I embrace the role of being a leader and just try and go out there and lead with my play."

Mbanasor will get his first opportunity this fall to see how far the defense has come when they Cardinals put the pads on for the first time on Tuesday afternoon.

Cardinals to focus on running backs this year

Pitino to tell all...

Top 5 Wide Receivers in the ACC