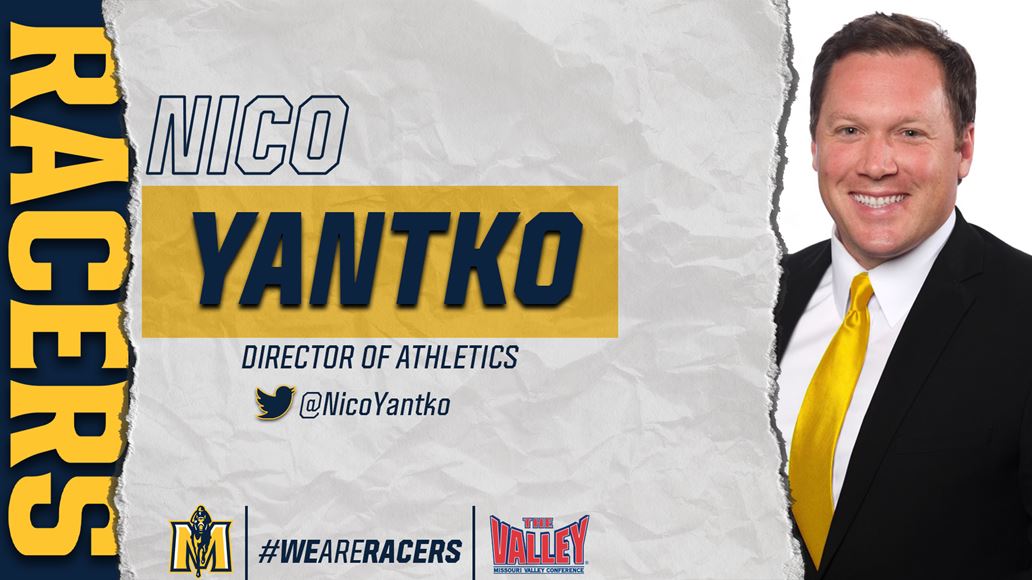 A two-degree Murray State alumnus, Yantko will be introduced in a public event in the Murray Room of the CFSB Center, Tuesday (Aug. 16) at noon. The event will be streamed on YouTube.

"We are extremely excited to have Nico back home," said Murray State University President Dr. Bob Jackson. "He has a wealth of experience at the highest level and will provide the leadership to move us forward in every respect as we transition to the Missouri Valley Conference and Missouri Valley Football Conference. Academically, athletically and otherwise, and as I state often, our best days are in front of us as we continue expanding on our 100-year legacy of excellence. Most importantly, Nico fully understands the priority of meeting the needs of our student-athletes and will work to raise the profile and success of all of our athletic programs."

"To be named the next Athletics Director at Murray State is a dream come true," said Yantko. "This opportunity is unbelievably humbling, considering how much this institution and what it stands for means to me and so many others. I cannot thank Dr. Jackson and the rest of our university leadership enough for the chance to return home. Murray State has been built on relationships, and with every special moment we share together, we will continue to build and advance the Racers' tradition of excellence. There is no higher honor than to serve my alma mater in this role, and Marnie and I cannot think of a better place to raise our family."

Yantko's career trajectory pointed to this moment sooner than later of becoming an athletics director for the first time.

His most recent success was built at the University of Louisiana in Lafayette where Yantko served for six years as the Deputy Director of Athletics.  He led the Ragin' Cajuns external departments and operations and managed a $35m budget that impacted 450 student-athletes, 16 sport programs, 205 department employees and eight athletics venues. Yantko's consistent delivery of increased resource development, brand popularity and competitive success was a major reason for Louisiana's 2021-22 run of Sun Belt Conference championships in football, baseball and softball and the department's top fundraising year of more than $30M.

Prior to his time at Louisiana, Yantko spent nearly seven years at the University of Missouri in the areas of development, capital campaigns & major gifts.

After earning his undergrad degree at Murray State in integrated studies, business and communications in 2009 and playing football for the Racers from 2007-09 as a quarterback, Yantko started his career with Racer Football as graduate assistant in 2010. Later that year, he moved into athletics external operations. Yantko worked at North Carolina State with the Wolfpack Club and as a marketing and sales assistant in 2011. He earned a Master's in human development and leadership, public administration from Murray State in 2020.

What others are saying about Nico Yantko...

"Nico Yantko embodies the core values, work ethic and leadership so important as the Director of Athletics.  He is a rising star in college athletics.  Congratulations to President Jackson and Murray State on a great hire."

"Nico is the perfect choice to lead Murray State Athletics to even greater success. He has character, vision, experience, and is a proud Racer.  This is an ideal homecoming."

"Nico is both an exceptional person and professional. He has played a major role in our establishment of national relevance at the University of Louisiana the past five years. I am excited to watch Nico lead Murray State Athletics for years to come and wish him, Marnie and their family great success."

"Congratulations to Nico Yantko for the leadership opportunity at Murray State. It's no surprise that he continues to advance in college athletics. He was a pivotal piece to our success in our four years at Louisiana. We will always be thankful for all that he did to help our team and staff. He and Marnie will represent his Alma Mater with class and integrity. The best is yet to come for the Racers!"

"?Murray State could not have made a better choice than Nico Yantko for their next director of athletics.  Nico has been an instrumental part of the success of Louisiana Athletics and the Sun Belt Conference.  As an alum and former football student-athlete, nobody loves Murray State more than Nico.  He is a bright, engaging and innovative athletics administrator and the perfect person to lead Murray State to new heights."

"I was honored to have shared the field with Nico for three years at Murray State. In that time, he was the definition of a leader whose work ethic and passion embodied what it meant to be a Racer. He was a heck of a player on the field but more importantly an even better person off it and I'm proud to call him a friend. There's not a doubt in my mind he's going to shine in his new role at Murray State and I can't wait to watch him take Racer Athletics to new heights."

"Nico Yantko is one of the brightest young administrators in college athletics today. He is smart and personable. He is a wonderful father, husband, and person. He will be a tremendous leader for Murray State and everyone will love him. Congrats on a great hire."