Ja Morant will be at Murray State Friday 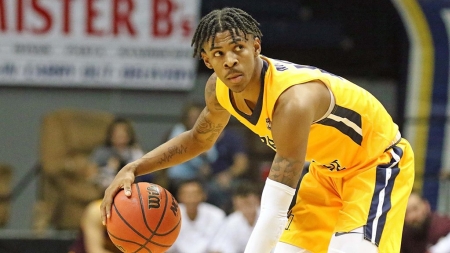 Former Murray State basketball star Ja Morant is coming back to campus Friday (Aug. 23) as he travels with his new team, the Memphis Grizzlies, in the team's preseason Regional Caravan Tour.

In June, Morant became the highest NBA Draft pick in the history of the Ohio Valley Conference when the Grizzlies selected him as the second overall pick in the 2019 NBA Draft.

His visit to Murray State begins with a 10:30 a.m. arrival at Wells Hall. Murray State students and community members are invited to come out and welcome back the Racers' latest and greatest basketball hero. After the stop at Wells Hall to visit with Murray State President Dr. Bob Jackson and Racer's head coach Matt McMahon, Morant will make his way through campus and visit with students along the way to the Curris Center.  At this time, the Grizzlies Caravan itinerary does not include organized individual photo and/or autograph opportunities.

Morant's return stirs memories of the amazing story he constructed in only two seasons at Murray State as he went from a small town talent from Dalzell, South Carolina to consensus All-American with the Racers. He set many school records, including becoming the program's all-time assist leader in only two seasons. However, his lasting legacy is being a big part of 54 victories in 65 games and taking the Racers to a pair of OVC regular-season and OVC Tournament titles and NCAA Tournament appearances.

After the visit to Murray State, the Grizzlies plan to take their Regional Caravan around the Mid-South with stops in Cape Girardeau, Missouri, Little Rock, Arkansas, St. Louis, Mo., and Nashville, Tennessee, before the end of the month.

The Grizzlies' first preseason game is at home with Maccabi Haifa (Oct. 6). The season opener is on the road against the Miami Heat (Oct. 23) with the team's home opener (Oct. 25) against the Chicago Bulls. Fans who want to support Morant as a member of the Memphis Grizzlies can do so now by going online to grizzlies.com/tickets.