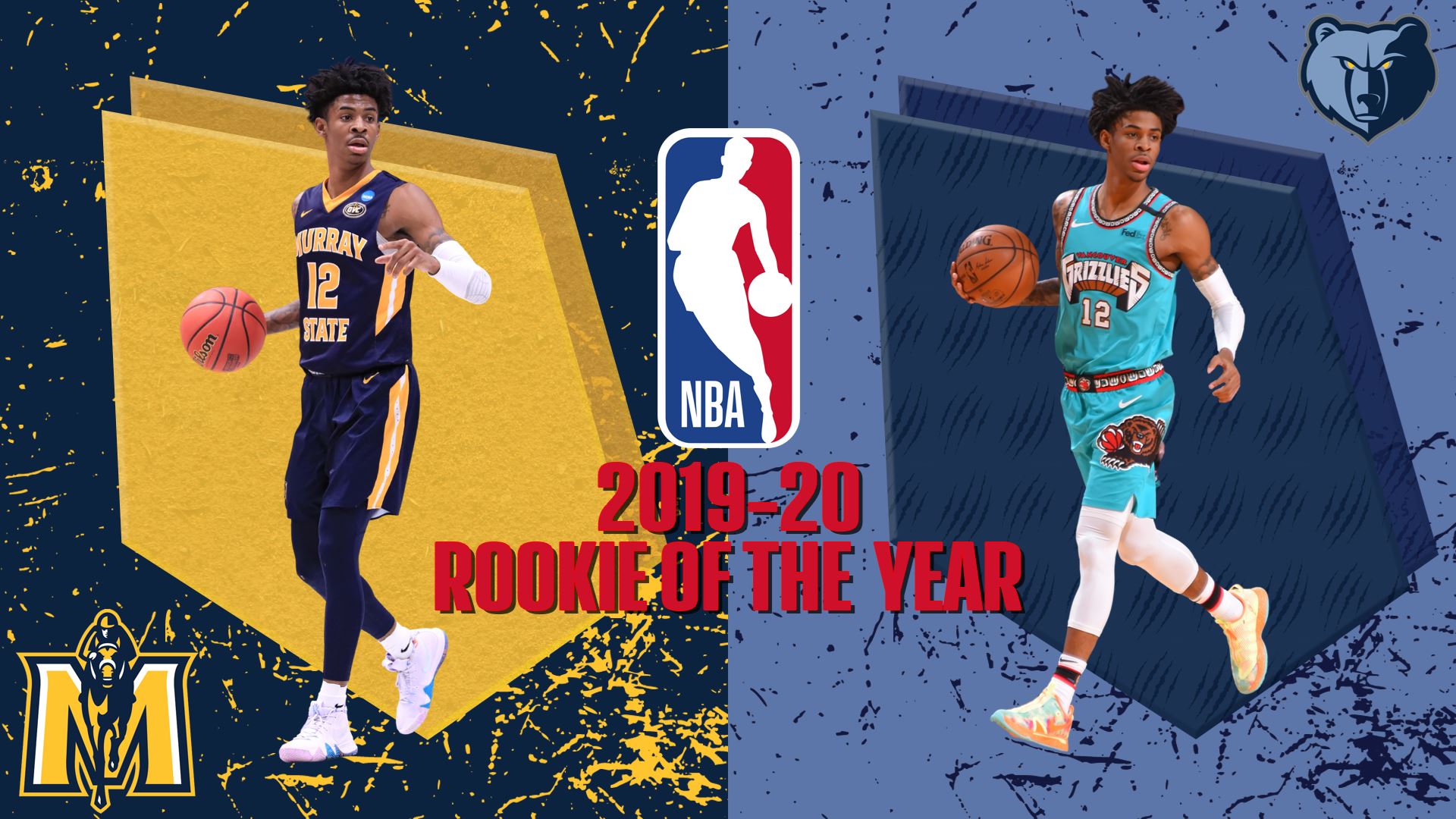 09/04/20 - The amazing career of Memphis Grizzlies point guard Ja Morant continued Wednesday when the former Murray State Consensus All-America was named the 2020 Rookie of the Year by the National Basketball Association.

Speaking on national television from his home in Memphis, Morant thanked all of those who have been and continue to support him.

"This is a blessing and definitely and honor because I put in a lot of work day in and day out, but it's all paying off. I still have a lot of work to do," Morant said on a national broadcast by TNT. "I always feel like there is room for improvement."

In 67 games for the Grizzlies in 2019-20, Morant played 31 minutes per game, scored 17.8 points and dished out 7.3 assists per game. He scored a season-high 35 points in the final Memphis Grizzlies v Philadelphia 76eJa Morantgame of the season against the Portland Trailblazers with 35 points to go with eight assists and seven rebounds. Along the way, Morant was the most consistent rookie in the league as he was named the NBA's Rookie of the Month three times and led all rookies in points per game, assists per game, double-doubles (15) and triple-doubles (2). Morant's first professional triple-double came against the Washington Wizards (Feb. 9) with 27 points, 10 rebounds and 10 assists. Morant topped the Memphis franchise record for season assist average that had stood for 22 seasons by Mike Bibby (6.3) in the 1998-99 season. Morant also set the Memphis record for assists in a single season that had stood also since 1998-99 by Antonio Daniels.

Morant's honor puts him in a rare category of players in the history of the NBA. He is one of just four players from a mid-major conference to win the Rookie of the Year award since the 1979-80 season. Morant joins Damian Lilliard (2013) of Weber State, David Robinson (1989) of Navy and Larry Bird (1980) of Indiana State as the only mid-major player to earn the NBA's highest rookie honor.

Morant is the first player in the Ohio Valley Conference to be named NBA Rookie of the Year. The OVC was founded in 1948.

Still adored by Racer Nation who pull for him just as much with the Grizzlies, Morant's 65-game two-season career with the Murray State Racers will forever be seen in the program's record book. In the 2018-19 season, Morant led the nation in assists, was named Ohio Valley Conference Player of the Year and was a seven-time All-America pick. Morant scored 808 points in that season and surpassed the great Jeff Martin (1987-88) who scored 806 points. Morant broke the MSU career assist record in only two season with 532, as he surpassed another MSU hall of famer, Don Mann who had 521 from 1986-89. Morant had four triple-doubles in his MSU career with the last one coming at the NCAA Tournament in 2018 when the Racers defeated Marquette.