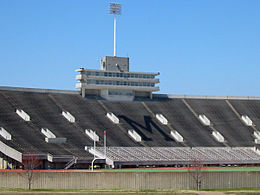 The Game
The 50th season at historic Roy Stewart Stadium begins Saturday when the Murray State football team welcomes former Ohio Valley Conference foe Jacksonville State to "The Finest Place We Know". Kickoff is scheduled for 6 p.m. with the game being broadcast local on Froggy 103.7 FM and nationally on ESPN+.

The Series At A Glance
The Racers are 2-16 all-time against Jacksonville State and 1-8 at Roy Stewart Stadium. The last time the two teams met was in April of 2021, when JSU topped Murray State, 28-14, in a de facto championship game for the OVC title. The Gamecocks have now won seven in a row in the all-time series with the last win by the Racers coming in Jacksonville in 2013.

Scouting The Gamecocks
Jacksonville State is currently 2-0 on the season after a 35-17 win at home Saturday over Davidson. Zion Webb passed for two touchdowns in the game and ran for three more, accounting for all five Gamecock scores on the day.

Webb is currently passing for 159.0 yards per game, while rushing for an additional 57.0. Matt LaRoche leads the rushing attack for the Gamecocks at 81.0 yards per game with Sterling Galban leading the JSU receivers with 68.5 yards per game. Defensively, Stevonte Tullis leads JSU with 18 total tackles, 1.5 tackles-for-loss and two fumble recoveries.

On The Farm With Racer 1

The Comeback 2013: Louisville - Michigan with Paul Rogers and Bob Valvano