Racer Basketball: 1931 A Season of Changes 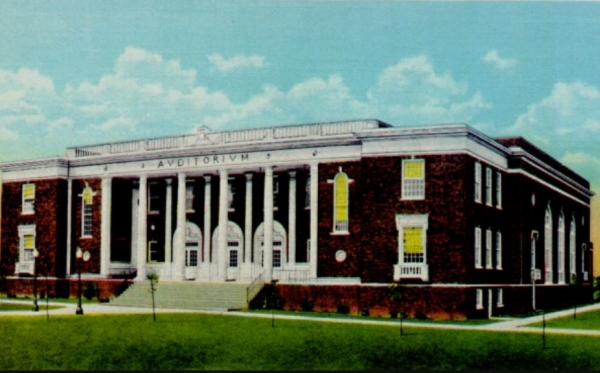 Dr. Carr describes it this way. “While I was attending the 1929 meeting of the Mississippi Valley Conference, I received a message from President Wells requesting me to go to Mobile, Alabama the next day and make application for Murray to be admitted to membership in the Southern Intercollegiate Athletic Association (SIAA).”

The SIAA was the largest athletic association in the south and one of the most important of its kind in the nation.  Dr. Carr said he answered the questions put to him to the satisfaction of the Committee on Admissions and Murray was fully admitted at the SIAA meeting in December of 1930.  Dr. Carr said, “The news was joyfully received at Murray by the faculty, students, President Wells, and the Board of Regents.”

Murray’s admission to this much more prestigious conference is another example of the driving force of Rainey Wells to assure that Murray was never a second class institution in any way.  Rainey Wells proudly commented on Murray’s admission to the SIAA at a Board of Regents meeting.  He said in part, “this action of the SIAA places this college on a par with some of the largest and oldest colleges of the country, and this institution was the youngest college which had ever gained membership in the SIAA.”

In 1930 the Kentucky General Assembly amended the charter of Murray Normal School as well as Western, Eastern and Morehead.  From that time forward it was known as Murray State Teachers College, increasing both its prestige and authority to offer degrees and pre-professional education.

The year 1931 was a difficult year for America and also for Kentucky. The students and their families were experiencing the overwhelming heartbreaks of the Great Depression.  There was little money in circulation and the area students, who relied primarily on their farmer parents for money, were suffering. The college itself had few funds, and looked in every corner to find sufficient funds to pay the faculty.

The Thoroughbreds had changed conferences. They were now in the SIAA preparing to play Kentucky teams for the first time.  Though they had changed conferences the schedule appears to have been hastily put together.  They played Vanderbilt early in the year, and lost by the one sided score of 48 to 29.  They played both Southern Illinois and Southeast Missouri for the first time that year and scheduled games against U.T. Jr. College (now U.T. Martin) for the first time.  Led again by Jim Miller and Willard Bagwell the team won two games from U T Jr. College handily, and also beat Southern Illinois twice.  They split with Southeast Missouri and ended the regular season with a very respectable 11 and 5 record.   Jim Miller was the leading scorer in 1931, but Bagwell returned as the leading scorer in 1932 and 1933

During the year the Murray team was struck by the illness of Willard Bagwell.  Bagwell scored 20 points against Oakland City and was soon diagnosed with the “mumps”, a childhood disease common in that time.  It was more serious for college students of Bagwell’s age, and he was held out until late January.  T. R Graham from La Center was the forward and having a very respectable year while Peg Mahew and Foster replaced the sterling guards, Houston and Brookshire, that had graduated in 1930.

Proud that they had been accepted as a member of the SIAA the 1931 Thoroughbred basketball team prepared to go to Winchester, Kentucky in the spring of the year to participate in the Kentucky division of the SIAA basketball tournament.  Teams playing included, the University of Kentucky, University of Louisville, Centre, Kentucky Wesleyan, Transylvania, Berea, Eastern and Western.

Disappointingly Murray received a telegram from tournament officials that Murray was not to be involved in the tournament with the lame excuse that, “Murray was too far away, and it would cost too much for them to attend.”  This telegram infuriated Rainey Wells.  He was going to personally see to it that Murray was not to be treated as second class in anything.  He immediately began making phone calls and sending telegrams to all his Kentucky contacts.  It was soon clarified that the reason for Murray’s exclusion was the fact that they had not played the minimum of six games against conference members.

However with Wells influence, most if not all, of the conference members reversed their vote the next day and Murray was invited to play in the tournament. Wells, a political powerhouse in the state, in a zinging one liner said to the state newspapers, “Murray may be eliminated in the tournament, but not before the tournament.”

The fight was not over. Just before the tournament began the tournament committee declared two Murray starters ineligible because they had transferred from other schools.  Starting guard Peg Mahew was one of those disqualified.

Rainey Wells was incensed.  He ordered coach Cutchin to play the two in the first game against Berea.  He said, “if we win the tournament and the SIAA says we are playing with ineligible players we will simply forfeit the games.”  In Rainey Wells fashion he was determined that Murray would be treated fairly.

In the first game of the tournament, Murray faced tournament favorite Berea.  The game went down to the wire with Berea edging the Thoroughbreds by a score of 32 to 31. The question over the eligibility of the two players became moot.  Berea went on to win the tournament, but Murray let it be known that they would never be treated in a cavalier manner by other teams in Kentucky.

Other schools in Kentucky would soon learned of the “fierce pride and undaunted spirit” of the Murray State Thoroughbreds.  They also learned once again that Rainey Wells was a formidable opponent and that he would be there fighting for Murray always.  J. D. Rayburn said of him, “He was our main cheerleader.  Many times he would come to chapel and speak and lead cheers for our basketball and football teams.”  “He was a great man and a visionary,” said Rayburn.