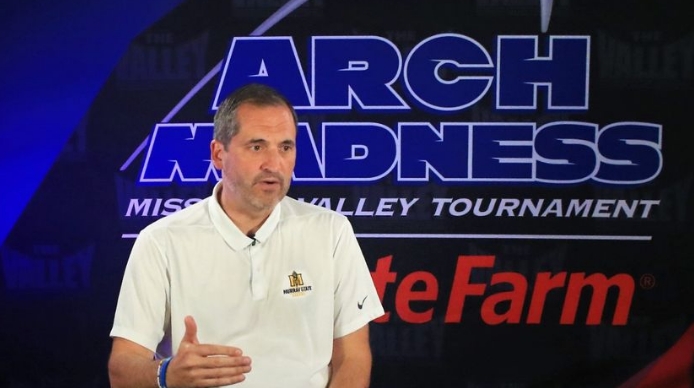 With 12 teams gathering content through all mediums, the day was a busy one as the student-athletes from each school (two per team) also participated in a community service project.

"It was a great opportunity to get Rob and JaCobi up here to St. Louis," said Prohm. "They got to see the Arch last night and then today, we had the chance for community service. The Valley is a first-class league, I'm glad about the move and excited about the challenge and to get going."

Next week marks the official beginning of the 2022-23 season in which the team can ramp up group activities in preparation for the exhibition contest against Brescia (Nov. 2). The Racers' 98th season of collegiate basketball begins at Saint Louis (Nov. 7). The annual Racer Mania night at the CFSB Center has been set for Oct. 20.

The Valley's preseason rankings and All-Conference teams will be announced prior to the start of the season.

The community service project was organized by United Way of Greater St. Louis and LifeWise. The student-athletes created 300 smile kits that will be given to at-risk children. Tooth decay is the single most common childhood disease according to the U.S. Surgeon General. The kits included toothbrush, toothpaste, dental floss and information about dental hygiene.

The Valley is welcoming three new members into the league for the first time in the same school year.

The Racers are joined by Belmont and UIC.

Evansville and Southern Illinois are the two Valley teams the Racers have met the most. MSU has played the Purple Aces 39 times and they have met the Salukis 38 times.

The Racers are 18-9 all-time vs the current MVC lineup at home in the CFSB Center. MSU has never met Bradley, Drake and Northern Iowa at home.

Prohm has never coached against Bradley or UIC.

Arch Madness is set for March when the MVC Tournament takes place at the Enterprise Center in St. Louis, March 2-5. The 2023 event marks the 33rd straight season for the tournament to be held in St. Louis.