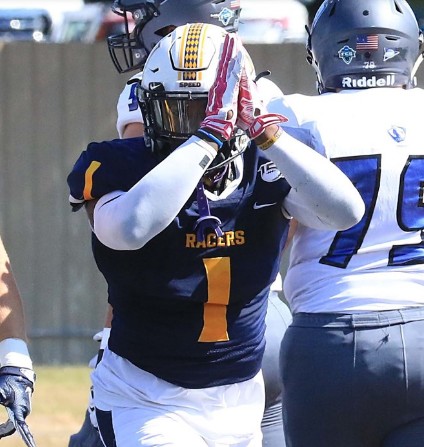 OFFENSIVE PLAYER OF THE WEEK

Cooper completed 25-of-39 passes for 305 yards and three touchdowns and rushed for 44 yards as No. 20 Jacksonville State came from behind to top Tennessee State 31-23. He had touchdown passes for 20, 42 and 8 yards in the game and passed Eli Jenkins for second place on the school's career touchdown list (48). It marked the fourth-straight week he has thrown for three touchdowns, the first JSU player to accomplish that since 2009. Cooper became the sixth player in school history to pass for 5,000 yards in a career during the win. Cooper ranks third nationally in passing yards (1,879), fourth in points responsible for (120), fifth in total offense (345.0 yards/game), sixth in passing touchdowns (16), seventh in passing yards/game (313.2), 11th in completions/game (24.17), 26th in pass efficiency (149.2) and 28th in completion percentage (63.3%).

CO-DEFENSIVE PLAYER OF THE WEEK

Warren tallied five tackles, including 2.0 for loss), had a pass breakup and recorded a safety as Murray State picked up its first OVC victory of the season in defeating Eastern Illinois 24-17. Warren's safety, the first for the team since 2011, came early in the second quarter, as he tackled EIU's quarterback for a seven-yard loss in the end zone. With his team leading by seven in the fourth quarter and facing a fourth down at its own 34-yard line, Warren called a fake punt from the field and rushed the ball 30 yards to keep the drive alive. The Racers would score later in the drive to account for the final margin in the game.

CO-DEFENSIVE PLAYER OF THE WEEK

Jefferson had five tackles, two quarterback hurries and a fumble recovered that he returned 44 yards for a touchdown as UT Martin moved to 2-0 in OVC play with a 38-28 win at Eastern Kentucky. With his team leading by three points late in the third quarter, he picked up a strip-sack fumble and raced to the end zone to put his team up by 10 points.

SPECIALIST OF THE WEEK

After missing four games due to injury, Zaidan returned to make three of four field goal attempts in Tennessee Tech's game at No. 23 Southeast Missouri. Included was a career-long 51-yard field goal with 31 seconds left in regulation to send the game to overtime. That marks the 10th-longest field goal in the FCS this season. The senior also made kicks from 33 and 35 yards and was a perfect 4-of-4 on PATs.

Fleming accounted for a season-best 246 all-purpose yards (the second-most by an OVC player this season) in Tennessee Tech's 43-37 double overtime loss at No. 23 Southeast Missouri. The freshman caught a season-high nine passes for 108 yards, rushed twice for 16 yards (including a 12-yard touchdown in the first quarter) and returned five kickoffs to 122 yards (24.4 yards/return). Fleming had a 31-yard kickoff return with 1:36 to play in the fourth quarter as the Golden Eagles moved an additional 30 yards to tie the game with a 51-yard field goal with 31 seconds to play. Fleming ranks second nationally in kickoff returns (35.8 yards/return), 19th in all-purpose yards (140.0/game - a mark that is second among FCS freshmen), 25th in combined kickoff yards (322) and 36th in receiving yards (427).