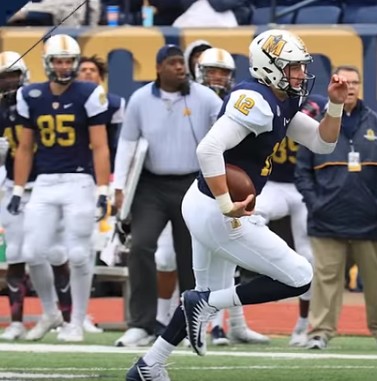 Hughes completed 22-of-27 passes for 318 yards and three touchdowns (with no interceptions) as Tennessee State defeated Tennessee Tech 41-14 on Homecoming. It marked the second-straight game Hughes reached the 300-yard plateau. The junior threw a 33-yard touchdown pass on the team's first play from scrimmage and added a seven-yard score in the second quarter and a 20-yard strike in the third quarter. Hughes ranks 12th nationally in completion percentage (65.9%) and 23rd in passing efficiency (146.8).

Swift had 11 tackles (7 solo), 2.0 sacks, two forced fumbles, an interception and pass breakup as Southeast Missouri ended No. 4 ranked Jacksonville State's 36-game Conference winning streak with a 37-14 victory. The win was the first for the Redhawks against the Gamecocks since the 2007 season. Swift keyed a defense that forced a season-high five turnovers and held JSU to just 99 yards rushing (after they entered the contest ranked 11th nationally with 257.5 rushing yards/game). Swift intercepted Zerrick Cooper late in the second quarter with Southeast leading 14-7. With the Redhawks leading 16-7 beginning the third quarter, Swift sacked Cooper, forcing the fumble which was recovered at the JSU 14-yard line. Two plays later SEMO scored to make the score 23-7. His second forced fumble came late in the fourth quarter, allowing Southeast Missouri to take a knee and end the game. It marked his fourth double-digit tackle performance of the season. Swift currently ranks eighth in nationally in forced fumbles (0.43/game) and 29th in tackles (9.3/game).

Reynolds averaged 45.3 yards on seven punts as Southeast Missouri downed No. 4 ranked Jacksonville State 37-14, ending the Gamecocks 36-game OVC winning streak which dated back to 2013. The sophomore twice pinned the Gamecocks inside their 3-yard line and had a third punt inside the 20-yard line. In the second quarter one of his punts was downed at the 1-yard line and two plays later the Redhawks recorded a safety that put them ahead 16-7. Reynolds later added a 71-yard punt, the longest in the OVC this season, the 10th-longest punt in the FCS this season and the ninth-longest in SEMO history. Reynolds currently ranks first in the OVC and 25th nationally in punting (42.1 yards/punt).

Dewberry had seven tackles and intercepted a pass that he returned 61 yards for a touchdown as Eastern Illinois topped UT Martin 24-21 in overtime. With the game tied late in the third quarter, Dewberry picked off the pass on third-and long and returned it to pay dirt to give the Panthers a 21-14 advantage. It marked Dewberry's first collegiate interception and touchdown.

Anderson, the transfer from Buffalo, completed 20-of-30 passes for 205 yards and two touchdowns and rushed seven times for 27 total  yards (11 net yards after sacks) in Murray State's 34-6 win at Eastern Kentucky. The victory pushed the Racers to sole possession of first place in the OVC and a 4-0 Conference mark for the first time since 1997. Anderson tossed a 28-yard touchdown pass in the third quarter and added a two-yarder to open the fourth quarter. Anderson currently ranks 17th nationally in completions/game (20.86), 24th in total passing yards (1,612) and 31st in total offense (251.9 yards/game).