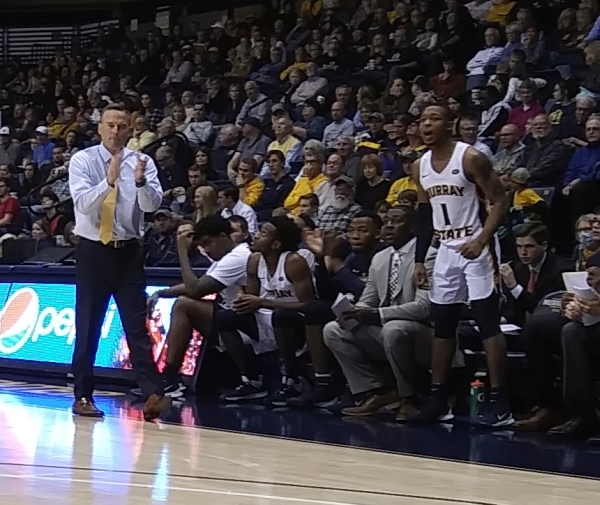 The Murray State Racers take to the road for the first time in the 2019-20 season with a Tuesday (Nov. 12) game against the Tennessee Volunteers at Thompson-Boling Arena in Knoxville. The game marks their first meeting since 2006 when the Racers last visited UT's home court. The Racers are 0-3 all-time in the series that began in 1945. The game has a start of 8 p.m. Central Time/9 p.m. ET.

The Murray State Racers opened their 95th season of collegiate basketball Saturday with a 69-49 victory over the visiting Southern Jaguars at the CFSB Center in Murray, Kentucky. KJ Williams totaled his third career double-double with 15 points and 11 rebounds, while Tevin Brown led the way in the scoring column with 17 points.

Tennessee is coming off of a 78-63 victory over UNC-Asheville. Lamonte Turner led the Vols with 17 points on 7-of-17 shooting, 2-for-8 from 3-point range. Yves Pons had 15 points and seven rebounds. The Vols committed 17 turnovers. Tennessee is ranked 10th in the nation by the Massey Ratings and 25th in the Coaches Poll.

In 1990, one of MSU's most famous games was played on Tennessee's home court. In the NCAA Tournament, the Racers were a 16th seed playing top seed Michigan State. On that day, Greg Coble's 3-pointer at the buzzer sent the game to overtime. The Racers eventually lost 75-71 and are still today, the only 16-seed to take a No. 1 seed into overtime. Murray State coach Matt McMahon was a youngster that day in Knoxville and was in the stands to watch the game. He witnessed the emergence of Racer Great Popeye Jones that day as Popeye scored 37 points and pulled down 15 rebounds as a sophomore on his way to eventual All-America status. Jones is MSU's all-time rebounder and fourth all-time scorer. After a decade as a player in the NBA, he's carved out a coaching career in the NBA and is currently an assistant on staff with the Indiana Pacers.

McMahon is a native of east Tennessee and grew up in Oak Ridge, he was also a graduate assistant coach with the Vols in the 2001-02 season.

In his 29th season, the "Voice of the Racers" and Murray State Hall of Famer, Neal Bradley is on the call again for the 2019-20 season. Former MSU assistant coach Kenny Roth provides expert analysis and commentary. All MSU games can be heard over the air and online at Froggy103.com and GoRacers.com. Tuesday's game can be see live on the SEC Network with Kevin Fitzgerald and Dane Bradshaw calling the action.