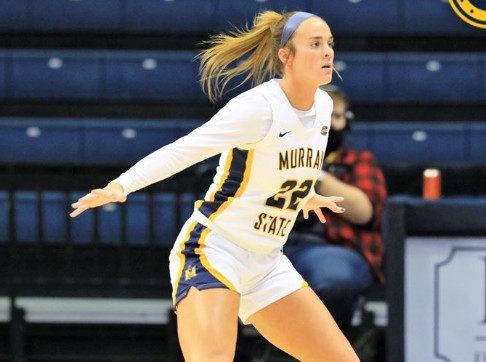 The Murray State women's basketball team led Mizzou with under three minutes left in the fourth quarter but could not stop a late surge by the Tigers, as they fell, 76-70, Thursday night at the Mizzou arena in Columbia.

·The Racers trailed by as many as 13 in the game, but used a third quarter in which they outscored the Tigers, 20-13 to propel themselves back in the game

·Mizzou's bench proved to be a key factor in the Tiger win, as it outscored the Racer bench 20-6

·MSU's free throw shooting helped keep it in the game, as the Racers went 11-for-15 from the free throw line, including a remarkable 7-for-8 performance by Katelyn Young.

·Murray State finished the game shooting 51.0-percent from the floor. The Racers shot a game-high 63.6 percent in the first and never shot below 42.8-percent in a given quarter.

The Racers chipped away at the lead for the entire third quarter, before finally taking their first lead of the game on a Hannah McKay fast break with 5:46 to play. MSU held the lead until just over two minutes when Hayley Frank took the lead back for Mizzou, one it never relinquished. Murray State was able to get within three with 28 seconds left, but could not get any closer.

·Katelyn Young led all scorers with a game-high 21 points, while McKay and Turley followed with 17 and 16, respectively. McKay also finished with a team-high seven rebounds.

The Racers return to action Monday at the CFSB Center against Cumberlands (KY) at 6 p.m.